Below for reference, is the content of the old 'Partnerships & Collaborations' web page - in case it is of any use to you.

With its strategic alliance with the Julich Supercomputer Center (JSC), Europe’s largest computational facility that leads the Partnership for Advanced Computing in Europe (PRACE) and its founding agreement with the National Super-computing Center (NCSA) of the University of Illinois, CaSToRC has assumed a leading role for computational science and engineering. CaSToRC brings the high-level expertise of JSC and NCSA to Cyprus and the region, and acts as a portal to their high-end resources that include some of the most powerful computers in the world. The EU views this role very positively, as manifested by the funding that has been granted to the Center.

University of Illinois at Urbana-Champaign

The Cyprus Institute has partnered with the National Center for Supercomputing Applications (NCSA) of the UIUC for the planning and implementation of CaSToRC. The partnership provides for the formation of a Planning Committee and a Scientific Advisory Committee comprising internationally recognized experts.

It involves the launching of joint educational and research programs, as well as close collaboration on the design and planning of the Center. In September 2009, the partnership was officially confirmed by the signing of a Research and Educational Agreement between both institutions in the presence of the Minister of Education and Culture of Cyprus. More... 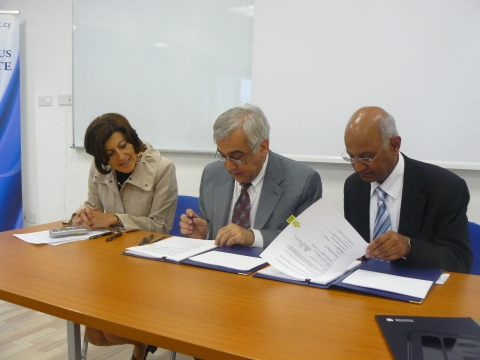 In October 2008, Cyprus (represented by CaSToRC) signed the Memorandum of Understanding becoming the 17th member country in PRACE, the Partnership for Advanced Computing in Europe.  PRACE prepares the creation of a persistent pan-European HPC service, consisting of several Tier-0 (petaflop) centers providing European researchers with access to capability computers and forming the top level of the European HPC ecosystem.  PRACE is a project funded in part by the EU’s 7th Framework Program. 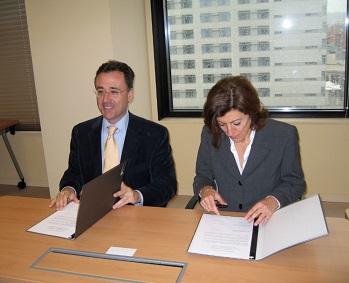 In February 2009, CyI and IBM signed a Memorandum of Understanding to pursue collaborative research in the areas of computational sciences and high performance computing. The CyI and IBM collaborative research agenda will include multi-scale simulations of materials for environmental technologies and green data center design; data analysis of complex, massive data from physical sciences; and high performance computing in financial and business modeling.

The scientific staff of CaSToRC, of the Institute, the IBM Zurich Research Laboratory and IBM Cyprus will work together to define joint projects in the above mentioned research areas. 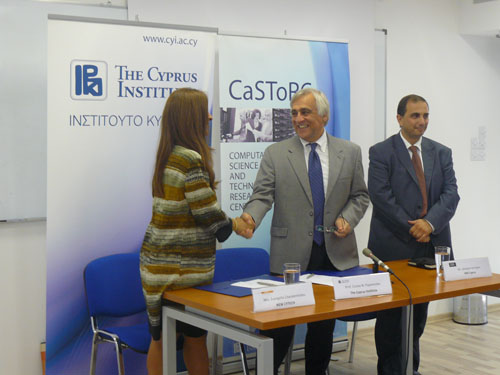 The Synchrotron-light for Experimental Science and Applications in the Middle East (SESAME) project is constructing the Middle East's first major international research centre as a cooperative venture by the scientists and governments of the region. It is being developed under the umbrella of UNESCO in Jordan. Cyprus is a member of the SESAME and has offered to contribute to the storage and processing of SESAME data. CaSToRC is collaborating with SESAME towards achieving this goal.

The Cyprus Institute and Forschungszentrum Jülich, Germany, signed a collaboration agreement in April 2009. The aim of this agreement is to promote joint research and educational activities between CaSToRC of the Institute and the Jülich Supercomputing Centre (JSC) of Forschungszentrum Jülich, in areas of common interest. A notable goal is the development of CaSToRC into a Regional Partner Facility for the Eastern Mediterranean in the sense of the European Strategy Forum on Research Infrastructures (ESFRI) with JSC being the major European partner.

The Great Lakes Consortium for Petascale Computation is a collaboration among colleges, universities, national research laboratories, and other  educational institutions in the United States. The consortium facilitates the widespread and effective use of petascale computing, through the  computing software, applications, and technologies.

A comprehensive educational and workforce development program ensures that advances made by consortium members are passed on to the next generation of researchers and applied  to frontier research questions in  science, technology, engineering, and the social sciences. CaSToRC is an Associate Member of the Great Lakes Consortium.