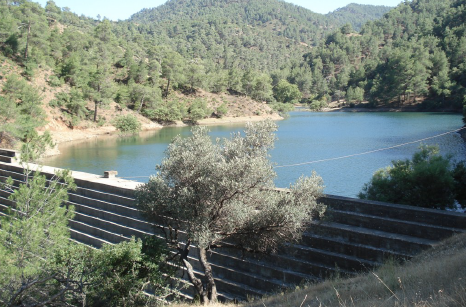 Water is a key ingredient for the development and pros-perity of the arid and semi-arid countries of the Mediterra-nean basin. Rainwater, which represents the primary source of replenishment for most of the region, is highly variable in space and time, while climate change is posing additional challenges. Water scarcity paired with uncertain rainfall occurrences have already affected the livelihood of rural families, forcing many of them to migrate to the region’s ever growing cities. These changes are threatening the landscape, cultural heritage, and food security of the region, leaving land and water managers, urban planners and policy makers with a complex set of problems.

Since its independence in 1960, Cyprus has undertaken a concerted effort to develop and harness its water resources to ensure wa-ter availability and to support its economic development. More than 100 dams and reservoirs have been built, irri-gation-water-use-efficiency programs have been implemented, thousands of kilometres of pipelines have been installed and five permanent desalination plants have been commissioned. Our water research aims to analyze the various sources of water and their utilization in order to contribute to the development of climate-resilient water management strategies for Cyprus and the Mediterranean region.

The water sector has traditionally focused on the development and exploitation of water from dams, streams, lakes and groundwater bodies (so-called blue water). In semiarid environments, however, 80-90% of the rain that falls on the land does not end up as blue water, but returns back to the atmosphere through evaporation and plant transpiration from the Earth's land surface and its vegetation cover (green water). The terms green and blue water have been recently introduced in global water research to shift our thinking from a supply-driven focus on water resources to a more holistic thinking about precipitation as the primary water source, with both green water and blue water providing society with the necessary ecosystems services and resources.

We developed a detailed model that computes the green and blue water consumption of 87 crops cultivated in 431 communities on Cyprus, in relation to the varying local weather conditions for the years 1981 to 2009. Our results indicate that during this period green water, which comes at a zero price tag, contributed on average 340 million cubic meters per year (Mm3/yr), providing 64% of all water consumption for crop production. In comparison, blue water demand averaged 190 Mm3/yr. Thus, agriculture requires almost three times the water consumptions in private households. But while the irrigated area covered only 23% of the cultivated land on Cyprus, it yielded 65% of the total crop production. The annual crop production derived from green water peaked at 535 000 tons in 1988, whereas the production from blue water reached a maximum of 490 000 tons in 1995. The analysis clearly showed that the water productivity (crop per drop) of irrigated crops was higher and more stable than that of rainfed crops. But it also indicated that rainfed crops are very effective water users! The different crops in the different seasons and communities showed highly variable water productivities, indicating that there are various opportunities for adapting agriculture and water management systems to climate change, which is being addressed in ongoing studies.

To assess the water uses, losses and inefficiencies of the ever growing towns and cities in Cyprus and the region, we developed the Urban Water Flow Model. The model quantifies and visualizes all sources and users of water entering and leaving an urban area. The model was tested and applied to the town of Limassol, in cooperation with the local water and sewage authorities. We found that during the hydrologic years 2003/04-2008/09, the rain falling on the city accounted for more than twice the potable water supplied to the town. The main water losses in Limassol were surface runoff, which constituted 30% of all outflows from the city, and evaporation from paved areas and roofs, which made up another 22% of the water lost.

The model includes an interactive water savings application which indicated that the implementation of household water saving measures and devices, rainwater harvesting and grey water use could reduce potable water demands by 50%. The model can be applied to any other city in Cyprus, thus providing useful insight and advice to water authorities and city managers.