Capidava, the Northern Frontier and the Archaeology of the Annona Militaris Within the Quaestura Iustiniana Exercitus
- and -
New Directions in the Archaeological Research in Istros / Histria

* This colloquium comprises 2 presentations
* The colloquium will be in English and the event is open to the public.

Capidava, the Northern Frontier and the Archaeology of the Annona Militaris Within the Quaestura Iustiniana Exercitus

The creation, in 536, of the administrative unit quaestura exercitus, with its centre in Odessos (present-day Varna), brought together the province of Scythia and neighbouring Moesia Secunda along the Northern frontier, the Aegean Islands (Cyclades), Caria and Cyprus. The only direct links between all these provinces were the sea and the navigable Danube. The fundamental institutional raison d'être of this strange administrative association was that of ensuring the financial stability and continuous food supply to the troops stationed on the Danubian border.
The main assignment was to steer the substantial stocks of wine, olive oil and corn from southern Greece, Aegean and Eastern Mediterranean to the congested garrisons in the forts along the Danube frontier and the northern Balkans.

Intensive archaeological investigations in Capidava (Constanța county, Romania) revealed during the last decades significant quantities of Romano-Byzantine containers precisely designed for transporting the strategic commodities from the Cyclades, Caria, and Cyprus. My topic will aim at pointing out the distribution of the amphorae in the province of Scythia during the 6th c., as far as it is available for the current state of research. We shall retrace the routes through which the annona collected in the overseas provinces of this quaestura was subsequently distributed to the troops stationed in the Danubian border provinces.
A review of the available amphora types and statistics for the best investigated fortifications starting from Singidunum (nowadays Belgrade) and Viminacium (Kostolac) to Halmyris (Murighiol, in Danube`s Delta) is inherent to an in-depth analysis of chronology and scale, features and geography of the big canvas.

Teaching and research activities oriented toward Roman and Early Byzantine history and archaeology. Scientific interests in the Lower Danube Roman border provinces, urban evolution in Moesia Inferior (1st – 7th c.), epigraphy and ceramic studies, as well as the economy of the Roman world, cultural history/ historical anthropology and religious studies, with special regard to the phenomena associated with the evolution from Paganism to Christianity in the Late Roman Empire. Studies and articles, archaeological reports, research contracts and grants, volumes, conferences and lectures in Romania and abroad (France, Italy, Austria and Germany, Bulgaria etc.).

New Directions in the Archaeological Research in Istros / Histria

In Istros/Histria, the archaeological team from the University of Bucharest has two research directions. Our main efforts focus on the excavation in the southern part of the acropolis, which aims to investigate the urban development in this part of the city during the site’s 1300 years of history.

At present we are excavating the Late Roman (6th c. AD) residential district, which has already revealed interesting aspects concerning the changes that occurred in the urban fabric when Christianity became the only accepted religion. The second direction concerns the identification of the city’s harbour, a project where we are collaborating with the team from Aix-Marseille Université, led by Prof. Chr. Morhange. In order to identify and study this most important complex, we are using an interdisciplinary approach that combines bio-sedimentological and geophysical analyses with the classical archaeological investigation. 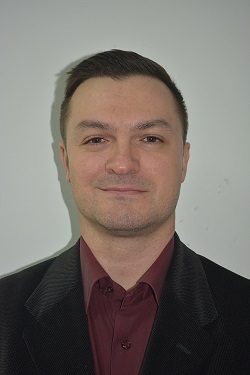 Scientific coordinator of a sector on the archaeological site Histria, Constanța County, Romania (since 2013); member of the Regional Commission for Historical Monuments (Bucharest, Ilfov and Giurgiu Counties) in 2014-2016; member in the National Archaeological Committee (since 2018).