*The lecture will be in English, the event is open to the public, light refreshments will be served after the talk.

Abstract
The discovery of a Roman "oneraria magna" shipwreck near the coast of Sardinia will be reported, along with the consequent recovery of half of their two thousand lead ingots. Results will be discussed of the analysis performed on the recovered metal, with the most advanced techniques normally used in nuclear and particle physics, such as X- and Gamma-ray spectroscopy, neutron activation, and inductively coupled plasma mass spectroscopy. The use of the Lead isotope ratios enabled the determination that the origin of this Lead was not from a Sardinian mine, as initially suspected due to its discovery near Sardinia, but from an identified mine in Spain. Further analyses are based on the use of Lead as a powerful archaeological tool.

A new approach to the application of accelerators, normally used for elementary particle nuclear physics, is the so-called "Muon Spectroscopy", performed by us at the RAL center in England. This novel technique enables the determination of the chemical composition of large archaeological artifacts at various points internally, without any physical damage. 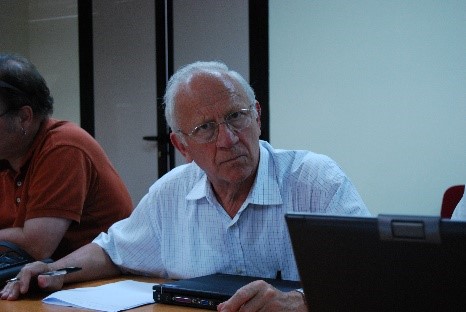 Prof Fiorini is an Emeritus Professor at the Universita' di Milano-Bicocca and national member of the ‘Accademia Nazionale dei Lincei’ and of other Academies; he is the recipient of the Enrico Fermi Prize of Società Italiana di Fisica, of the medal “Benemeriti della Scienza e della Cultura” of the President of the Italian Republic and more recently of the Bruno Pontecorvo Prize by the International Institute of Nuclear Physics (Russia).
His research has been mainly focused on experimental nuclear and subnuclear physics, with particular reference to the properties of the neutrino, and he participated in the discovery of weak neutral currents.
More recently he has participated with Till Kirsten in the underground Gallex experiment, carried out in the Laboratori Nazionali del Gran Sasso, which was the first to prove the presence of neutrinos generated by proton-proton reactions inside the sun.
His current research activity is mainly devoted to the use of thermal detectors in the search for rare events, a technique first suggested by him with Tapio Niinikski in 1983. He founded the international CUORE experiment (Cryogenic Underground Observatory for Rare Events) whose main aim is the search for neutrinoless double beta decay of 130Te, and is currently under way. He also founded its predecessor on a reduced scale, CUORICINO, still one of the most sensitive bolometer towers in the international arena.
A considerable part of his current research is devoted to archaeometry. A series of studies on the properties and origin of Roman Lead has been carried out in view of its procurement for use as a shield in his bolometric experiment, due to its lack of Pb210. These studies are currently focused on detecting the properties of metallic archaeological remains in a nuragic village near Sassari.

With the support of the Embassy of Italy in Cyprus, as part of the Enrico Fermi Lecture Series

This event is part of the CyI Colloquium Series.  View all CyI events.