CaSToRC, the HPC National Competence Centre,
invites you to the EuroCC and SimEA Online Seminar Series

The webinar will be in English and the live stream is open to the public.
Live streaming of the discussion will be available on Zoom (Password: VsSCz1)
Images and/or recordings of our open public events may be used by The Cyprus Institute for dissemination purposes including print and digital media such as websites, press-releases, social media, and live streaming.

The combination of electrical conductivity and optical transparency in a single material gives transparent conducting oxides (TCOs) an important role in modern optoelectronic applications such as in solar cells, flat panel displays, and smart coatings. The most commercially successful TCO so far is tin-doped indium oxide (Indium Tin Oxide – ITO), which has become the industrial standard TCO for many optoelectronics applications; the ITO market share was 93% in 2013.

Its widespread use stems from the fact that lower resistivities have been achieved in ITO than in any other TCO; resistivities in ITO have reached as low as 7.2 × 10-5Ω cm, while retaining >90% visible transparency. In recent years, the demand for ITO has increased considerably, mainly due to the continuing replacement of cathode ray tube technology with flat screen displays. However, indium is quite a rare metal, having an abundance in the Earth’s crust of only 160 ppb by weight, compared with abundances for Zn and Sn of 79000 ppb and 2200 ppb, respectively, and is often found in unstable geopolitical areas.

The overwhelming demand for ITO has led to large fluctuations in the cost of indium over the past decade. There has thus been a drive in recent years to develop reduced-indium and indium-free materials which can replace ITO as the dominant industrial TCO. In this talk, Prof. Scanlon will outline the strategies that we use in the Materials Theory Group to look beyond the current TCO materials, highlighting the interplay of theory and experiment. 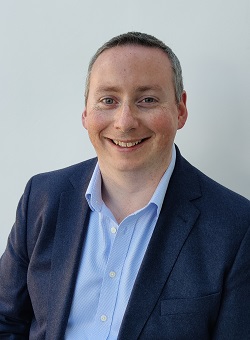 David completed his undergraduate degree in Computational Chemistry at Trinity College Dublin (TCD) in 2006, before gaining his PhD in Chemistry also at TCD in 2011, working with Professor Graeme Watson. He won the Royal Irish Academy Young Chemists Prize 2011, for “the most outstanding Irish PhD thesis of 2011 in the area of chemical sciences”. He then moved to the UK to take up a Ramsay Fellowship in the Department of Chemistry in UCL, hosted by Professor Sir Richard Catlow, where he has been ever since. He was appointed as a Lecturer in 2013, promoted to Reader (Associate Professor in the American naming convention) in 2016 and to Professor of Computational Materials Design in 2018.

He was awarded the 2015 RSC Harrison-Meldola Memorial Prize for the “development and application of computational techniques to understanding and predicting the properties of functional semi-conductors for energy applications” and was made a Fellow of the Royal Society of Chemistry. In 2018, he was awarded the UCL Student Union Student Choice Award for “Outstanding Research Supervision”. Following this he was shortlisted for the Times Higher Education Awards 2018 for “Outstanding Research Supervisor of the Year”. In 2021, he was awarded the RSC Materials Chemistry Division Early Career award for his work on conducting oxides.

He has published over 240 papers in his career, and he is currently the Lead Editor for the new journal PRX Energy.

The EuroCC project has received funding from the European Union’s Horizon 2020 research and innovation programme grant agreement No. 951732

This project has received funding from the European Union’s Horizon 2020 research and innovation programme under grant agreement No. 810660


Contact This email address is being protected from spambots. You need JavaScript enabled to view it.