The Cyprus Research and Educational Foundation (CREF) was established in February 2004 driven by the vision of promoting the advancement of knowledge and its humane and benevolent applications throughout the Eastern Mediterranean, highlighting the role of Cyprus as a gateway of knowledge and innovation between EU and the region and to help in the transformation of Cyprus’ economy into a knowledge-based economy.

To realize its vision and objectives, CREF, from the very beginning, planned the establishment of a new research and educational institution, which will promote research and education in Cyprus and its region. CREF designed the new institution, The Cyprus Institute (CyI), aiming at benefitting the public interest at large. CyI was developed to be international in its membership and partnered with established world class institutions, being independent in its support but public in its commitment and service and being devoted to the wellbeing of the local, regional, and the international community. 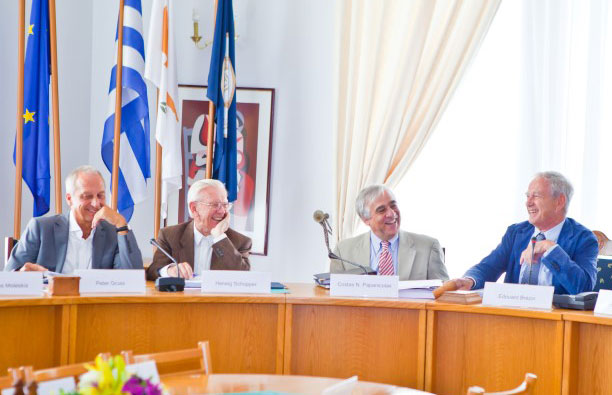 The initial planning for the establishment of CREF and CyI took place from 2000 to 2004 under the aegis of the Cyprus Development Bank, led at the time by Mr. John Joannides and Mr. Andreas Mouskos. They, supported by Mr. Alecos Stamatis, together with a team of outstanding scholars shaped the core vision and undertook the overall coordination, research and planning of the project. The team of academics consisted of Prof. Ernest J. Moniz of the MIT, (currently, the U.S. Secretary of Energy), the late Professor Guy Ourisson, (founding President of Louis Pasteur University and former President of the Academy of Sciences in France), Prof. Frank Rhodes (former President of Cornell University) and Prof. Herwig Schopper, (former Director General of CERN);
Prof. Costas N. Papanicolas of the University of Athens, served as the principal investigator and coordinator of the team. The initial group in turn, engaged scholars of international standing committed to help create an outstanding institution. The vision of this new institution and its staged development was presented, debated and endorsed by a Convocation of International Scholars held in Nicosia in 2002. The Convocation was chaired by the late Prof. Hubert Curien, who accepted to become the founding chair of the CREF Board.

The Convocation culminated with a meeting at the Presidential Palace with President Glafcos Clerides presiding and with Former President George Vassiliou assuming a defining role in the process. The Government endorsed the findings of the study and took the necessary steps for a rapid launching of what was to become The Cyprus Institute. The Goverments of late Presidents Glafcos Cledides and Tassos Papadopoulos endorsed both the vision and the plan of the Institute. CREF was formally established in February 2004 and launched The Cyprus Institute in January 2005. The Government of President Demetris Christofias supported the initiative. More recently, President Nicos Anastasiades endorsed the development and revised plans for CyI and accepted, as all the previous presidents of the Republic, to become the Honorary Chair of CREF.