Climate change is expected to significantly impact human health through extreme weather events and air pollution. Additionally, the epidemiology of vector-borne diseases is predicted to change, through differences in the distribution and breeding seasons of vector species (such as mosquitoes) in response to climate warming.
The region of the Eastern Mediterranean and the Middle East (EMME) is of particular interest with respect to climate change as it is projected to experience greater changes than globally averaged. EMME also borders regions where many vector-borne diseases are endemic, and historically it has been devastated by emerging and resurgent vector-borne diseases.
Endemic transmission by mosquitoes of Dengue (DENV) and West Nile viruses typically occurs in some of the EMME countries. However, in the last few years, an unusually high number of notifications of vector-borne diseases were reported in South Europe, including local transmission of mosquito transmitted viruses. Of particular interest is chikungunya that is transmitted by the Asian tiger mosquito, Aedes albopictus, a highly invasive species that is rapidly spreading across Europe. This mosquito can also transmit many other diseases, including Dengue, which devastated the EMME region and South Europe in the past. Cyprus remains a high-risk area for Ae. Albopictus establishment, although no specific surveillance of these mosquitoes has been carried out.
The threat to human health posed by mosquito transmitted viruses, coupled with a drive in the scientific community to map the current presence of Ae. albopictus and develop knowledge of both mosquito/pathogen biology, has motivated this project, which focused on developing tools to predict the likelihood of Ae. albopictus-borne viral disease transmission in the EMME as a function of projected climate change. These tools will be invaluable for focusing both vector surveillance and control strategies, and health programmes in the region.

As a part of this project, a mosquito surveillance study was carried out in Cyprus assessing the potential establishment of invasive mosquito species (IMS) in the island. During surveillance activities in 2013 and 2014, no invasive species of interest were found; however, Aedes caspius, Culex pipiens and Culex torrentium were morphologically identified. This finding necessitates pathogen screening for these species to assess the presence of any disease-causing arboviruses transmitted by them. To the best of our knowledge, this is the first time Culex torrentium was reported present in Cyprus.
A modelling framework was developed comprising (i) literature review and model building, (ii) parameterisation and validation, and (iii) performing large-scale projections using the model and current/future predicted meteorological data. This was sufficiently generic to allow extension to many kinds of vector-pathogen dynamics, and it has been successfully applied to investigate environmental dependence of Aedes albopictus population dynamics and chikungunya transmission and epidemiology. The resulting risk maps indicate a strong movement of risk and severity of chikungunya outbreaks towards north-western Europe, reaching the UK, Netherlands, Sweden and Finland in the course of the 21st century.
To enable public access to the findings of this research, The Cyprus Institute has developed an online interactive risk-assessment tool for global monitoring of current and future risks of tiger mosquito. The tool is available at http://vbd.cyi.ac.cy and is updated regularly with improved predictions and global surveillance data. 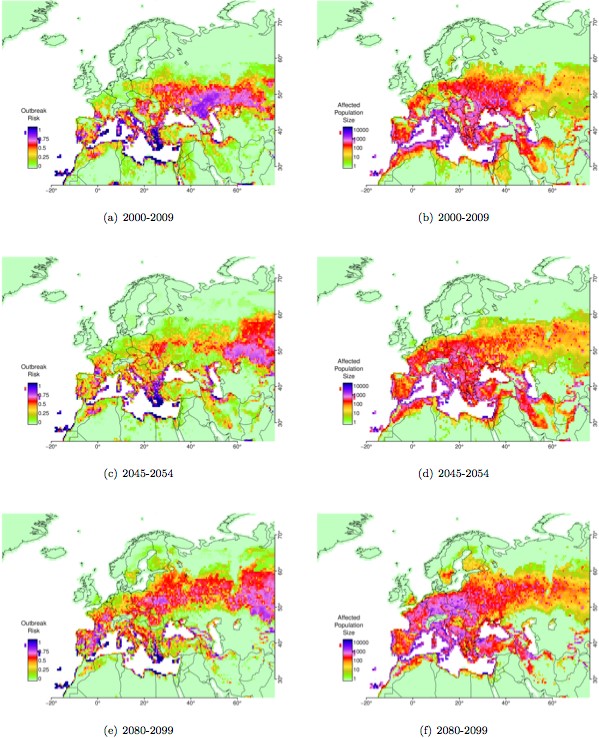 Prof. Jos Lelieveld, Email: This email address is being protected from spambots. You need JavaScript enabled to view it.
Tel. +357 22208700

Prof. George Christophides, Email: This email address is being protected from spambots. You need JavaScript enabled to view it.
Tel. +357 22208651