More deaths due to air pollution

Every year 3.3 million people die prematurely from the effects of air pollution worldwide - a figure that could double by 2050 if emissions continue to rise at the current rate. This is the conclusion of a study carried out by a team of researchers at the Cyprus Institute and the Max Planck Institute for Chemistry in Mainz. Surprisingly, the largest sources of air pollution are not industry and transport but small domestic fires and agriculture.

Exposure to air pollution is particularly acute in Asia, especially in China and India, where three-quarters of the world’s pollution-related deaths occur. In the current issue of the journal Nature, a team headed by Johannes Lelieveld, Director at the Max Planck Institute for Chemistry (MPIC) and Professor at the Cyprus Institute (CyI), reported that 1.4 million people per year in China and 650,000 people in India die every year as a consequence of air pollution. In the EU exposure to fine particles and ozone claims 180,000 lives a year, including 35,000 in Germany. In many countries, air pollution accounts for roughly ten-times more deaths than road accidents.

Prof. Lelieveld, Head the Atmospheric and Climate Modelling Group at the Cyprus Institute, with his colleagues Ms Despina Giannadaki (CyI), Andrea Pozzer (MPIC) and other collaborators in the USA, Cyprus and Saudi Arabia investigated for the first time how mortality rates are affected by various emission sources, such as industry, transport, agriculture, fossil fuel-fired power plants, as well as domestic energy use. The latter category includes diesel generators, small stoves and smoky open wood fires, which many people in Asia use for heating and cooking. They also calculated the mortality rates in individual countries and the proportion of deaths due to various causes, which can support policy making.

Strokes and heart attacks account for three-quarters of premature deaths

Lelieveld’s team focused on the most critical air pollutants, namely fine particles with a diameter of less than 2.5 micrometres and ozone. They used a global atmospheric chemistry model to calculate the concentrations of pollutants and to provide data for locations that are not monitored by air quality measurements. They then combined the results with epidemiological data. “We know rather well from statistical epidemiological studies in Europe and the US with several hundred thousand participants how specific pollutant concentrations affect mortality rates,” says Johannes Lelieveld. However, the atmospheric chemist points out that these data are not representative of many megacities in Asia, where air pollution is much higher than in European and American cities. The team therefore used a refined method to determine the impact of extreme smog in those locations.

“3.3 million people die prematurely every year as a result of air pollution. That’s a huge toll,” says Lelieveld, commenting on the results. Nearly three-quarters of the deaths are due to strokes and heart attacks, and 27 percent to respiratory diseases and lung cancer. According to epidemiological studies, fine particulate matter leads to cerebrovascular, heart and pulmonary diseases and lung cancer, while ozone tends to cause pulmonary conditions such as chronic cough and shortness of breath. The microscopic particles penetrate deep into the lungs and possibly even into blood vessels. There is evidence that they contribute to the formation of vascular plaques, which increases the risk of heart attack and stroke. It is still unclear how various types of fine particles, such as soot, sulphates, organic substances and fine mineral particles, differ in their toxic effects.

Lelieveld and his colleagues were surprised when they examined the individual sources of air pollution. “It is generally assumed that industry and transport are the worst air polluters. But that is evidently not the case on a global scale,” says Lelieveld. Much of the smog in India and China is caused by small domestic fires. “Although these are low-key activities, they add up, particularly if the majority of the population uses them,” he says. Overall, one-third of premature deaths worldwide are attributable to this inefficient form of combustion.

By contrast, a leading cause of air pollution in Europe, Russia, Turkey, Japan and the eastern United States is, surprisingly, agriculture. Ammonia enters the atmosphere as a result of the use of fertilizers and intensive livestock farming. It then undergoes a number of reactions to form ammonium sulphate and ammonium nitrate. These substances, in turn, are a major factor in the formation of small airborne particles. In fact, agriculture is the cause of one-fifth of all deaths due to air pollution. In some countries, for example in the Ukraine, Russia and Germany, that figure is over 40 percent.

Other major sources are fossil-fuel fired power plants, industry, biomass combustion and motor vehicles. Taken together, they account for another third of premature deaths. Just under a fifth of premature deaths are attributed to natural dust sources, particularly desert dust in North Africa and the Middle East.

Lelieveld believes that the high number of smog-related deaths in Germany compared to other European countries is due chiefly to the country’s central location in Europe. “Germans also have to breathe the polluted air from other countries,” he says. On the other hand, Germany – a densely populated country with much industry, intensive agriculture and high traffic densities – causes a considerable amount of air pollution itself. Traffic, to which the researchers attribute only five percent of deaths worldwide, accounts for 20 percent of deaths in Germany, or about 7,000 lives a year. Thus, twice as many people die from the effects of vehicle emissions than from road accidents.

Most recently, Lelieveld and his colleagues predicted how the situation is likely to change in the coming decades. They assumed a business-as-usual scenario in which emissions continue to rise at current rates and are not curbed by new legislation. Based on that assumption, pollution-related mortality in South Asia and East Asia would double by 2050. The number of smog-induced deaths worldwide could rise to 6.6 million per year. Pollution-related mortality in Europe and the USA is likely to increase moderately, especially in big cities.

E-mail: This email address is being protected from spambots. You need JavaScript enabled to view it. 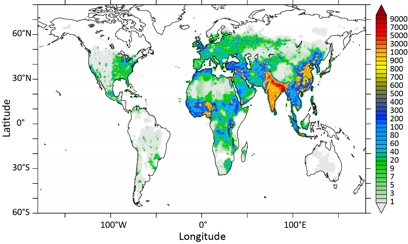 Figure caption: Deadly “Business as usual”: If the air pollution increases as usual with growing population and growing economic strength, the number of people who die due to air pollutants will increase significantly from 2010 until the year 2050. These are the results from calculations of an international team of researchers at the Max Planck Institute for Chemistry. The color scale represents the increase in deaths due to an expected stronger air pollution: white - no increase; red - 9000 deaths more per year.