The number of climate refugees could increase dramatically in future. Researchers of The Cyprus Institute and the Max Planck Institute for Chemistry in Mainz have calculated that the Middle East and North Africa could become so hot that human habitability is compromised. The goal of limiting global warming to less than two degrees Celsius, agreed at the recent UN climate summit in Paris, will not be sufficient to prevent this scenario. The temperature during summer in the already very hot Middle East and North Africa will increase more than two times faster compared to the average global warming. This means that during hot days temperatures south of the Mediterranean will reach around 46 degrees Celsius (approximately 114 degrees Fahrenheit) by mid-century. Such extremely hot days will occur five times more often than was the case at the turn of the millennium. In combination with increasing air pollution by windblown desert dust, the environmental conditions could become intolerable and may force people to migrate.

More than 500 million people live in the Middle East and North Africa - a region which is very hot in summer and where climate change is already evident. The number of extremely hot days has doubled since 1970. “In future, the climate in large parts of the Middle East and North Africa could change in such a manner that the very existence of its inhabitants is in jeopardy,” says Jos Lelieveld, Director at the Max Planck Institute for Chemistry and Professor at the Cyprus Institute.

Lelieveld and his colleagues have investigated how temperatures will develop in the Middle East and North Africa over the course of the 21st century. The result is deeply alarming: Even if Earth’s temperature were to increase on average only by two degrees Celsius compared to pre-industrial times, the temperature in summer in these regions will increase more than twofold. By mid-century, during the warmest periods, temperatures will not fall below 30 degrees at night, and during daytime they could rise to 46 degrees Celsius (approximately 114 degrees Fahrenheit). By the end of the century, midday temperatures on hot days could even climb to 50 degrees Celsius (approximately 122 degrees Fahrenheit). Another finding: Heat waves could occur ten times more often than they do now.

By mid-century, 80 instead of 16 extremely hot days

In addition, the duration of heat waves in North Africa and the Middle East will prolong dramatically. Between 1986 and 2005, it was very hot for an average period of about 16 days, by mid-century it will be unusually hot for 80 days per year.  At the end of the century, up to 118 days could be unusually hot, even if greenhouse gas emissions decline again after 2040. “If mankind continues to release carbon dioxide as it does now, people living in the Middle East and North Africa will have to expect about 200 unusually hot days, according to the model projections,” says Panos Hadjinicolaou, Associate Professor at the Cyprus Institute and climate change expert.

Atmospheric researcher Jos Lelieveld is convinced that climate change will have a major impact on the environment and the health of people in these regions. “Climate change will significantly worsen the living conditions in the Middle East and in North Africa. Prolonged heat waves and desert dust storms can render some regions uninhabitable, which will surely contribute to the pressure to migrate,” says Jos Lelieveld.

The research team recently also published findings on the increase of fine particulate air pollution in the Middle East. It was found that desert dust in the atmosphere over Saudi Arabia, Iraq and in Syria has increased by up to 70 percent since the beginning of this century. This is mainly attributable to an increase of sand storms as a result of prolonged droughts. It is expected that climate change will contribute to further increases, which will worsen environmental conditions in the area.

In the now published study, Lelieveld and his colleagues first compared climate data from 1986 to 2005 with predictions from 26 climate models over the same time period. It was shown that the measurement data and model predictions corresponded extremely well, which is why the scientists used these models to project climate conditions for the period from 2046 to 2065 and the period from 2081 to 2100.

The researchers based their calculations on two future scenarios: The first scenario, called RCP4.5, assumes that the global emissions of greenhouse gases will start decreasing by 2040 and that the Earth will be subjected to warming by 4.5 Watt per square meter by the end of the century. The RCP4.5 scenario roughly corresponds to the target set at the most recent UN climate summit, which means that global warming should be limited to less than two degrees Celsius.

The second scenario (RCP8.5) is based on the assumption that greenhouse gases will continue to increase without further limitations. It is therefore called the “business-as-usual scenario”. According to this scenario, the mean surface temperature of the Earth will increase by more than four degrees Celsius compared to pre-industrial times.

In both scenarios, the strongest rise in temperature in the Middle East and North Africa is expected during summer, when it is already very hot, and not during winter, which is more common in other parts of the globe. This is primarily attributed to a desert warming amplification in regions such as the Sahara. Deserts do not buffer heat well, which means that the hot and dry surface cannot cool by the evaporation of ground water. Since the surface energy balance is controlled by heat radiation, the greenhouse effect by gases such as carbon dioxide and water vapor will increase disproportionately.

Regardless of which climate change scenario will become reality: both Lelieveld and Hadjinicolaou agree that climate change can result in a significant deterioration of living conditions for people living in North Africa and the Middle East, and consequently, sooner or later, many people may have to leave the region. 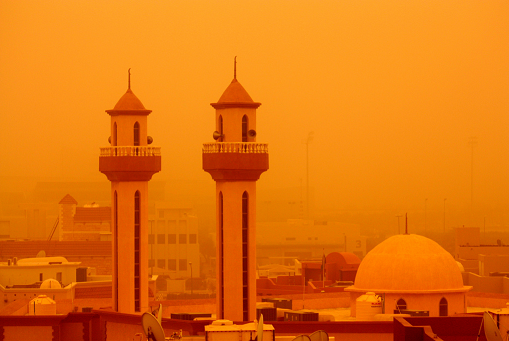 Plagued by heat and dust:
Desert dust storms such as here in Kuwait could occur more often in the Middle East and North Africa as a result of climate change. In addition, temperatures on very hot days could rise to 50 degrees Celsius on average in the region (approximately 122 degrees Fahrenheit) by the end of the century. Image: Molly John, Flickr, Creative Commons.

Unbearably hot: In the Middle East and North Africa, the average temperature in winter will rise by around 2.5 degrees Celsius (left) by the middle of the century, and in summer by around five degrees Celsius (right) if global greenhouse gas emissions continue to increase according to the business-as-usual scenario (RCP8,5). The cross-hatching indicates that the 26 climate models used are largely in agreement, and the dotting indicates an almost complete match.

International coverage so far:
For a comprehensive list: https://springerlink.altmetric.com/details/6929223/news

Other recent articles in scientific journals: