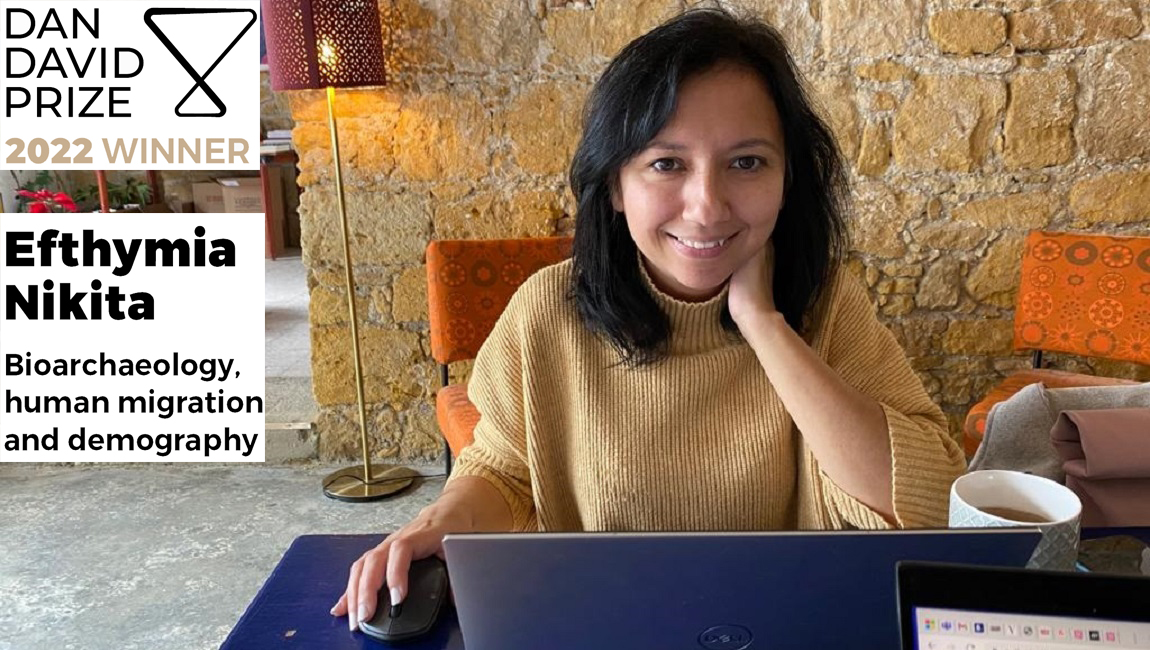 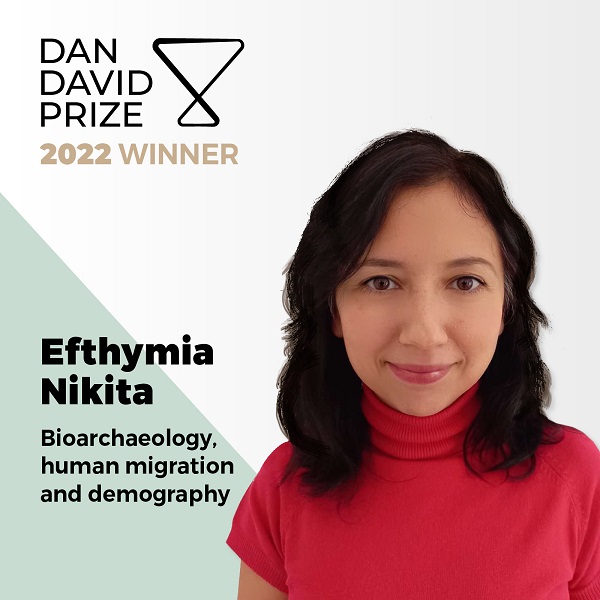 Dr Efthymia Nikita, Assistant Professor in Bioarchaeology at the Science and Technology in Archaeology and Culture Research Centre (STARC) of The Cyprus Institute, was awarded a Dan David Prize, the largest history prize in the world, in recognition of her outstanding scholarship that illuminates the past and seeks to anchor public discourse in a deeper understanding of history.

Dr Nikita was selected as a winner of the 2022 prize, alongside eight other outstanding early- and mid-career scholars of history. A selection committee of eminent scholars in the historical fields assessed hundreds of nominations from around the world as part of a rigorous process to select the winners, who will each receive $300,000 to recognize their achievements to date and support their future work.

The Dan David Foundation, headquartered at Tel Aviv University, was founded in 2001 by entrepreneur and philanthropist Dan David. From 2002 until 2021 the Dan David Prize was annually awarded to three senior scholars, each one having made an exceptional contribution in one of three dimensions: Past, Present, Future. Amongst them, only four archaeologists had received it, including the founder of ancient DNA research Svante Pääbo. In 2022, the Prize was relaunched as the largest history prize in the world and it is now awarded annually to nine early and mid-career scholars and practitioners in the historical disciplines.

Dr Nikita is part of the first cohort of winners to be selected for the Prize in its new format. Among the nine winners for 2022, Dr Nikita is the only archaeologist, whilst the other eight recipients are historians and art historians. The award ceremony will take place in Tel Aviv on Wednesday, 11th of May, 2022, and a series of related outreach activities will start on Monday, 9th of May and will end on Thursday, 12th of May.

Her research aligns with biocultural approaches and seeks to provide insights into the activity, mobility, demography, health, and diet of past populations. In addition, she is engaged in refining the available osteoarchaeological methodology for the study of commingled remains, biodistances, and activity markers. Her research has resulted in over 70 articles and book chapters, including the textbook ‘Osteoarchaeology: A Guide to the Macroscopic Study of Human Skeletal Remains’, published by Elsevier, which received an honorable mention at the American Publishers Awards. She is currently co-Editor in Chief for the second edition of the Encyclopedia of Archaeology (Elsevier), as well as Associate Editor for the Journal of Archaeological Science and Archaeological and Anthropological Sciences.

Since joining The Cyprus Institute in 2016, Dr Nikita has led two Research and Innovation Foundation funded Excellence Hubs projects, and has supervised two Marie Skłodowska-Curie fellows, as well as another post-doctoral fellow and four PhD students. Her team is not only publishing systematically on diverse aspects of past life in the Eastern Mediterranean, as revealed through bioarchaeology, but also creates important open access resources to promote further research in the region, as well as outreach activities.

“We live in a world in which the humanities, and particularly history, are devalued and attract less investment, even as it remains clear that only by deepening our knowledge of the past we can gain a better understanding of the present,” said Ariel David, board member of Prize and son of the founder. “For this reason, we have chosen to focus exclusively on the historical disciplines and support emerging scholars and practitioners, within and beyond the academy, at a stage in their career when the Prize can make a bigger impact.”

“I am deeply honored to receive a Dan David Prize. I see this not so much as an award for my accomplishments so far, but as the means to develop more interdisciplinary research initiatives, create opportunities for other young scholars, and develop resources for researchers, educators and the public,” noted Dr Nikita in her reaction to winning the prestigious award.