The project of survey and targeted excavation in the region of Agios Sozomenos (Agios Sozomenos Excavations and Survey Project, ASESP) aims at re-assessing the extent and density of habitation, the chronological overlaps and synergies between sites and the role of the “forts” on the plateau of Agios Sozomenos, in relation to the emerging pattern of settlement. The survey was completed in 2016, having taken into account and having re-evaluated previous work in the Yialias/Alikos river valleys. Excavations at the forts of Barsak and Nikolidhes have shed light  on the chronological range of their lifespan and are expected to illuminate the nature of their function as well as the political/social organization relating to the exploitation of local resources of the region at the time. Excavations at Dzirpoulos, at the foot of the plateau have revealed part of a large complex building with intense workshop activities, and two phases of use from the beginning of the LCI to LCII.

In addition, excavations at the hillock  on the East of Barsak, and a short distance from Dzirpoulos, have revealed a house with a large hall where large pithoi were found broken, originally standing on stone bases, in rows on either side of the room. The building was destroyed by fire and abandoned. An overview of the results of the excavations and survey with relation to a preliminary assessment of the settlement pattern, lifespan and abandonment, with possible implications, will be attempted. 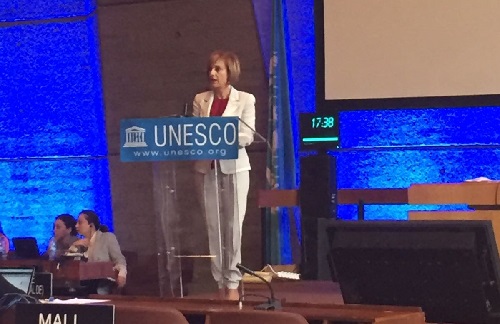 From 1996 to 2010 she excavated a multi-period site on the Hill of Agios Georgios Nicosia, an extensive settlement that provided documentation for various periods of the city’s history. She secured funding and created a site museum-educational centre at the Hill of Agios Georgios while the archaeological site is being landscaped so as to become accessible to visitors. She also conducted excavations at the Podocataro Bastion, on the Venetian Walls of Nicosia.  As of 2013 she has undertaken a new project in the centre of the island which involves survey, using new technologies and problem-oriented excavations in the region of Agios Sozomenos, to investigate the socio-economic organization of the island in the Late Bronze Age.

As Curator of Antiquities responsible for museums, she is promoting the renovation of museums, the creation of new ones and the organization of periodical exhibitions. A major part of her work involves the digitization of collections, sites and monuments through several EU or other co-funded projects, including research projects nd the fight against illicit trafficking of cultural objects. She is also responsible for the protection of Underwater Archaeology and is currently promoting the development of a specialised unit.

She benefited from a number of fellowships for her research projects; she was external examiner for Ph.D. theses at La Trobe University and the University of Queensland, Australia and Vrije Universiteit, Brussels. She is a member of the Editorial Board of the arch

aeological journal Studies in Mediterranean Archaeology (SIMA). In 2010 she was elected Fellow of the Society of Antiquaries of London.