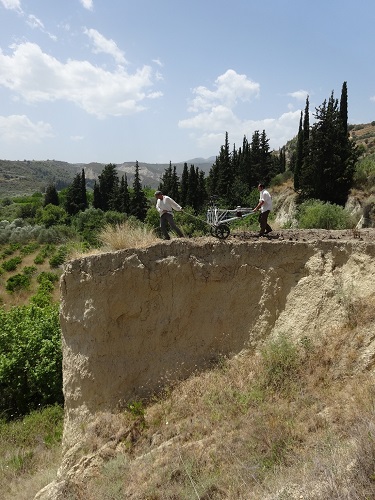 The ancient polis of Sikyon is well known from literary sources as a famous centre of arts and crafts, particularly in Archaic and Classical times. In 303 BC, the city was destroyed by Demetrios Poliorketes, who re-established it on a better-defensible site nearby. While the Hellenistic city of Sikyon is well-known since a long time through excavations and other kinds of archaeological research, the older city, apart from rescue excavations, was never systematically investigated until recent years. In 2015, however, a collaborative project of the National Museum of Denmark, the Ephorate of Antiquities in Corinth, the Danish Institute at Athens and the Institute of Geosciences from the University of Kiel was set up in order to find and explore the Archaic-Classical site, its material culture and urbanistic development.

This paper will present the various methods of geophysical investigation, remote sensing, survey and excavation applied in the first three years of the project with regard to their benefits, problems and results. The geoarchaeological survey generated a landscape model of the area and informed about the changes in landscape as well as the existence and depths of archaeological strata, while geophysical methods, archaeological survey and remote sensing helped to define the precise location of Old Sikyon and its approximate borders. Moreover, these methods provided first information about the city’s inner structure, about some of its buildings as well as extraurban areas. The excavations started in the summer of 2017 were able to shed new light on some of these structures and give insight to the chronological development and material culture of Sikyon.

These excavations are to be continued in the next years in order to further investigate the development and material culture of Old Sikyon, to compare the results to the information of the written accounts and to offer new insights in Archaic and Classical urbanism in the Greek mainland.

She was assistant professor at the Free University of Berlin, the Excellence Cluster ‘Topoi’ in Berlin and the University of Rostock until 2010 and developed a focus on ancient fortifications: she carried out international projects about the city walls of Messene, Zeugma on the Euphrates and Kalydon in Aetolia, which are about to be published, and co-founded and directed the international network Fokus Fortifikation. Ancient Fortifications in the Eastern Mediterranean, which published two major volumes about fortification research in 2016.

From 2010-2015, Silke Müth-Frederiksen held scholarships of the German Research Association for her Habilitation project More than war: Symbolic functions of ancient fortifications at the German Archaeological Institute at Athens and the Humboldt University in Berlin. Since 2016, she is working as a Senior Project Researcher at the National Museum of Denmark in Copenhagen and directing the cooperation project about the Archaic and Classical city of Sikyon together with Dr Konstantinos Kissas from the Ephorate of Corinth.