The colloquium will be in English and the event is open to the public.

Live streaming of the lecture will be available on The Cyprus Institute’s YouTube Channel
Live streaming is facilitated by the CySTEM project funded by the European Union’s Horizon 2020 Research and Innovation program under Grant Agreement No. 667942. 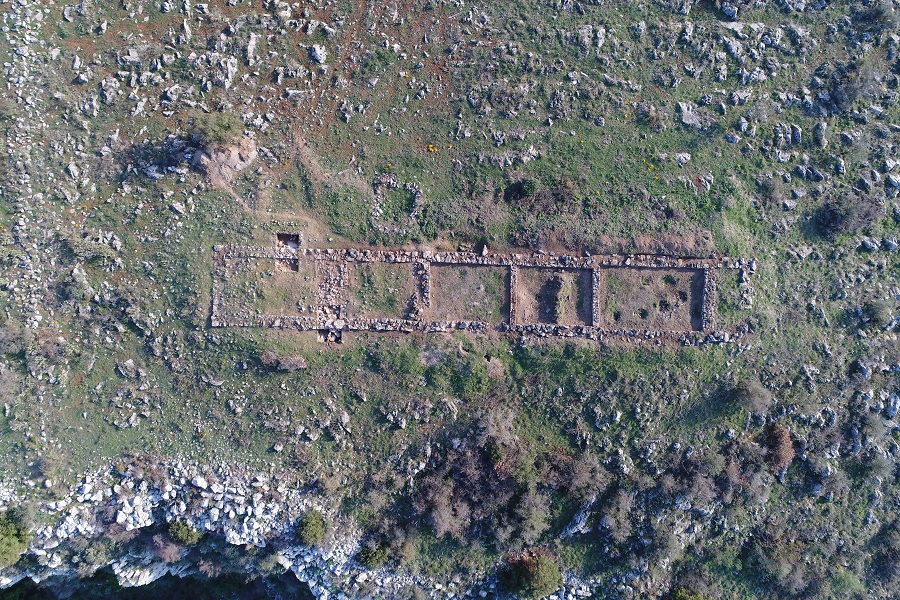 Recent surface surveys and excavation projects which took place on the acropolis of Glas (2018-), on the Aghios Ioannis hill (2016-2018) as well as on certain areas of the Mycenaean drainage system (2011-2014) has yielded encouraging results concerning the sites’ stratigraphy and the Middle Helladic and the Mycenaean occupation of the lakeside northern edge of the former Copais lake.  The small, rocky elevation of Aghios Ioannis has a total surface of approximately 35 acres, it is 360 m. long and 55 to 160 m. Its maximum height difference from sea level is 116 m. and a mere 20 m. from the surrounding lowlands. The hill’s upper surface is generally smooth. It is characterized by a mild gradient from South to North and from East to West, while it presents an oblong basset at the middle of the hill. This basset is said to have hosted a residential as well as burial use. Two spacious natural plains are traced to the south. Burials, possibly for children, were found in both areas inside the residences, refueling the debate on the coexistence of the living and the dead in Middle Helladic residence areas in mainland Greece. In the middle and northern terrace of the hill, clusters of cist graves of the same period have come to light and were investigated. Some of them are surrounded by a stone-built enclosure and covered by a low tumulus following the tradition of circular burial architecture. A first reading of the architectural remains found on the hill of Aghios Ioannis indicates that the oldest building phase of the site dates to the Middle Helladic III / Late Helladic I period). As the soil of the hill is extremely rocky for it to have been cultivated, it is not unlikely that the residents of Aghios Ioannis had managed to create a cultivable area at the shore of the lake. If this hypothesis is confirmed, it reinforces the view of some researchers concerning the Middle Helladic background of the Copais drainage works.

The Mycenaean settlement of Glas is situated in a steep islet at the north-eastern edge of the Copais basin. It was established in the 13th century BC and it is related to the drainage works of the lake, one of the most impressive technical works of Greek prehistory. The citadel was fortified by a massive cyclopean wall which runs along the brow of the rocky natural platform for approximately 2.800 klm and surrounds an area ten times greater than Tiryns and seven times than that of Mycenae. The fortification wall features four gates (including one double gate), and encompasses a cluster of three adjacent and intercommunicating central enclosures. A residential and probably administrative complex dominates on the summit of the rocky hill, comprising two narrow wings (north and east) joined at a right angle, which open to an inner courtyard.

The excavation conducted in 2018 within the framework of a new interdisciplinary research program under the auspices of the Archaeological Society of Athens, focused on the western part of the acropolis, where two major building complexes ("M" and "N") were investigated. Building "M", situated in the northwestern part of the citadel was first located by F.Noack in 1893. In 2018 the full size of the elongated building (9,25m. x 58,75m) was determined, which had walls made of roughly cut stones and mudbrick superstructure. In the same year came to light the remains of an enormous building complex (41,70m. x62,70 m.) at the southwestern part of the citadel (Building Complex “N”). The complex comprises of five rectangular buildings symmetrically organized. The pottery consisting mainly of cooking pots, confirms that the acropolis of Glas was abandoned around 1200 BC. The findings recovered during the 2018 excavation season also consist of lead and fresco fragments, terracotta roof tiles and stone tools.

During the LH IIIB period, the site of Aghios Ioannis was reoccupied and fortified with a Cyclopean wall of varying width (approx. 1.70 to 2.50 m), while is maximum preserved height, at the middle of the western part of the fortification, does not exceed 1.20 m. It appears that the foundation of the fortification wall rests on the natural rock which was appropriately worked to receive the first course of the foundation. The Cyclopean fortification of Aghios Ioannis surrounds the flat area at the top of the hill, following the line of its brow. The excavation trenches that were dug along the inner facade of the fortification wall yielded remains of buildings above the Middle Helladic stratum. 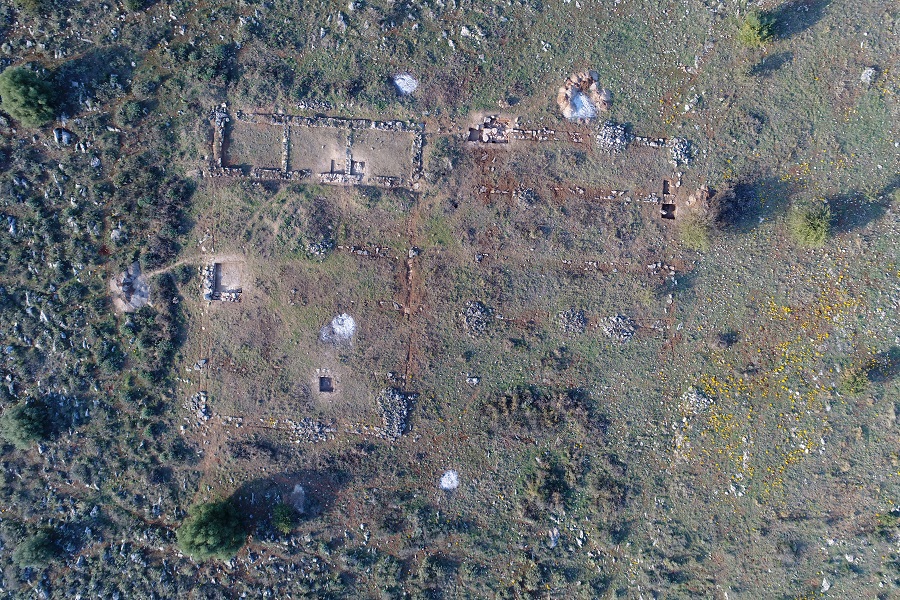 According to a first approach, the reinstallation and fortification of the site of Aghios Ioannis at the north-east edge of the lake close to Glas and at a common chronological horizon towards the latter, livens the debate on the socio-political hierarchical relations in the Mycenean landscape of the Copais, as well as on the Orchomenos-Glas dipole, and it reinforces the view that around 1250 B.C. a gigantic scale construction program took place in northern Copais, in conjunction with the intensification of the agricultural production under the supervision of the palatial center of Orchomenos. The latter undoubtedly played a highly important role in the region from early in its history. This mainland and, above all, lakeside power center, was dominated mainly central Greece. Unlike Thebes, it did not concentrate on overseas relations, but rather on mastering the unique natural resource in its territory, with the aim of becoming self-sufficient in grain and other crops.

The establishment of ‘sur mesure’ installations at the edge of the lake and more specifically at its north-east edge falls under the same context, possibly emanating colonists from other sites in Locris, maybe from the north, in order to participate in the construction of the technical works. The nodal position of Glas, Aghia Marina and Aghios Ioannis close to the largest sinkholes, whose obstruction could damage the drainage works, allowed the control of the technical works, while ensuring direct access to the commercial sea routes of the Aegean through the mountain line of Kefalari and the port of Larymna.

Mrs. E. Kountouri was born in Nicosia, Cyprus, in 1967. She studied History and Archaeology at the University of Athens (1985-1990) and she received her master's degree with specialization in Prehistoric Archaeology (1995) and her doctorate (2003) from the same University on "The Late Helladic IIIA pottery of the cemetery of Volimidia and the modern ceramic production of Messinia". She was a fellow of the State Scholarships Foundation for undergraduate and postgraduate studies (1991-1993) and at the University of Austin in Texas (2000). As a partner of the excavations of Pylos since 1990, she worked in Chora and Pylos museums of Messinia and she participated in many university excavations as Archanes in Crete, in Akrotiri of Thera and Iria of Naxos. After a written examination, she was appointed at the Hellenic Archaeological Service (1993) and she served in the Epigraphic Museum (1994), in Sparta (1994-1996) and in Thebes (1996-2006). Additionally, she also worked as the Head of the Secretariat Department of the Central Archaeological Council (since 2006) and as the head of the Directorate of the National Archive of Monuments (2011-2014). Currently, since 2014 she is the Director of Prehistoric and Classical Antiquities. Furthermore, she has also conducted excavations in Sparta, in Gythio, and in different regions of Boeotia (Thebes, Orchomenus, Chaeronea, the area of Copais, Distomo and Antikyra).

Moreover, she has planned, organized and implemented many projects in the context of European programs of the third CSF, NSRF 2007-2013 and NSRF 2014-2010, among them, those that stand out are "the new exhibition of the Archaeological Museum of Chaeronea (2004-2008)", the "Enrichment of the Digital Collections of Movable Monuments of the Ministry of Culture and Sport and the Development of a new Information System for the Archive of Monuments", the "Archaeological Cadastre" (2012 ongoing), the «Intergrated management of archeological sites and monuments management plans for the inscribed monuments/ sites in the unesco world heritage list».​  She has also organized different educational programs, workshops and archaeological conferences (2018 on going).

Between the years 2011-2014 she conducted a systematic interdisciplinary research in cooperation with the National Technical University and the University of Meinz to document the Mycenaean drainage in Kopais, while in the years 2016-2018, she run, in collaboration with Professor Michael Lane, a systematic program excavation in different Mycenaean sites of the northeastern Copais. Currently, she is conducting a five-year (2018-2022) systematic excavation program in Glas, a Mycenaean acropolis on the northeast corner of the Copais, under the auspices of the Archaeological Society. Finally, she has received grants for the financing of the above research programs of the INSTAP (Institute for Aegean Prehistory), the Mediterranean Archaeological Trust, the Vronwy Hankey Memorial Fund for Aegean Studies, the Paul and Alexandra Canellopooulos Foundation..