The Future of Economy and the common issues of Economic development were analyzed by the distinguished Professor of Economics Daniel Cohen during the «Hubert Curien Memorial Lecture 2015» organized by The Cyprus Institute on 29 October. Prof. Cohen explained the relationship of technology to the different development models and its effect on the labor market and economic challenges we face.

Daniel Cohen is Professor of Economics at the École Normale Supérieure and the Université de Paris-I and at the École d'économie de Paris. He is a member of the Council of Economic Analysis of the French Prime Minister, as well as a senior advisor to the bank Lazard. He is the author of many widely translated books, including "The Wealth of the World and the Poverty of Nations", "Our Modern Times: The Nature of Capitalism in the Information Age", "Globalization and Its Enemies" and "Three Lectures on Post-Industrial Society".

According to Prof. Cohen, what we need is growth, not wealth. Economic growth is the religion of the modern world, the elixir that eases the pain of conflicts, the promise of indefinite progress. It is the solution to our perennial worries about not getting what we don’t have.

Wealth does not necessarily associate to satisfaction. A higher pay is clearly constantly attractive, yet once we've come to that objective it is never enough. Also, as we set objectives for ourselves driven by our present desires, we neglect to consider how our wishes change after some time and under new circumstances. This explains why economic growth, more than pure wealth, is the key to the functioning of our society, since it provides each of us with the hope that we can rise above our present condition, even though this dream remains ever elusive.

Which brings us to the fundamental question: Will economic growth, return, and if it doesn’t, what then? Experts are sharply divided. The pessimists, led by the economist Robert Gordon, believe that the potential for economic growth is now much lower than in the last century. The new industrial revolution may have given us the smartphone, but that hardly compares, in his thinking, to the great advances of the 20th century: electricity, the automobile, the airplane, movies, television, antibiotics. On the other hand, optimists tell us that Moore’s Law is going to allow “the digitization of just about everything.”

To decide who is right, one must first recognize that the two camps aren’t focusing on the same things: For the pessimists, it’s the consumer who counts; for the optimists, it’s the machines. Yes, computers have in some cases replaced humans, but the essential question then becomes: What happens to the workers who are replaced by machines? This is not a clash between those who believe in technology and those who don’t. New technologies are destined to produce marvels. What matters is whether they will substitute for human labor or whether they will complement it, allowing us to be even more productive. Also, Prof. Cohen stated that middle class has been victimized due to the technology taking over, since the majority of people are not able to find productive jobs.

The event was attended by the state and civic officials, ambassadors, members of the Board of Trustees of The Cyprus Institute, and distinguished personalities from the scientific and business world. 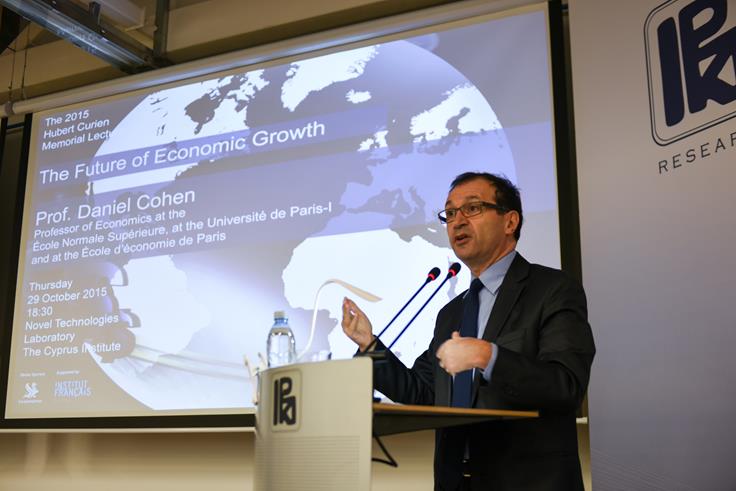 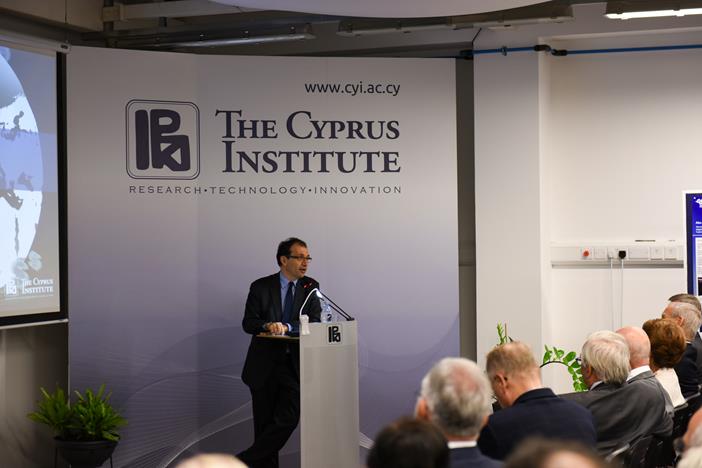 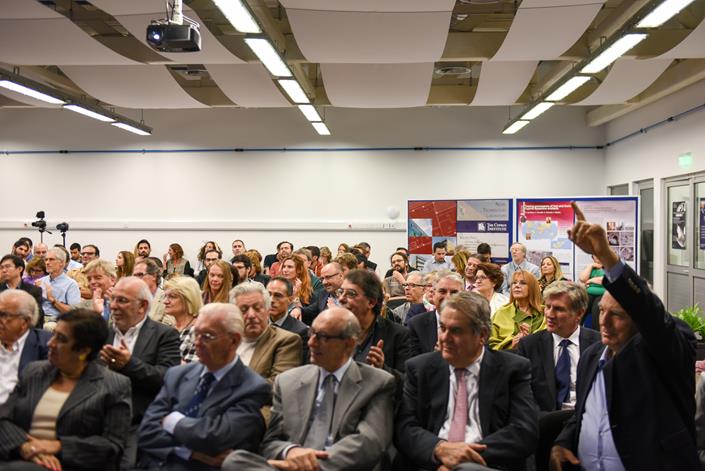 You can watch the full recording of the lecture below.

The 2015 Scientific Day, organized by The Cyprus Institute for the 2nd consecutive year, honored Prof. Edouard Brézin on the completion of two terms (2006-2015) as Chair of the Board of the Cyprus Research and Educational Foundation (CREF). Edouard Brézin, a renowned theoretical physicist, is an Emeritus Professor at the Pierre and Marie Curie University and member of the Theoretical Physics Laboratory at École Normale Supérieure (ENS). He has served as Professor at the École Polytechnique and he was the Director of the Physics Department at ENS. He has also served as President of the Administrative Council of the French National Center for Scientific Research (CNRS). He was elected as a member of the French National Academy of Sciences in 1991 and served as its President from 2004 to 2006. He is the recipient of many distinctions and awards, both from the US and many European Academies. In 2011, he was awarded the Dirac Medal for his scientific contributions to theoretical physics.

In December 2012, the President of the Republic of Cyprus presented Prof. Brézin with the Grand Cross of the Order of Merit of Cyprus for his contribution in science, technology and education in Cyprus and the wider region. In January 2013 he was named as “Commander of the French Legion of Honor”, one of the highest distinctions of the French Republic. He served for nine years (2006-2015) as the Chair of the Board of the Cyprus Research and Educational Foundation (CREF), the foundation that under its aegis The Cyprus Institute (CyI) was established and is being developed. Edouard Brézin is now serving as the Chair of CREF-CyI’s Scientific Advisory Council.

The day comprised five sessions on the topics of, 'E. Brézin's contribution to The Cyprus Institute', 'Fundamental Physics', 'Climate Change in the Middle East and North Africa', 'Scientists in the Quest of Peace' and 'Europe at Crossroads: Perspectives of Southern Europeans and Academics'. 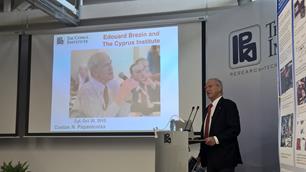 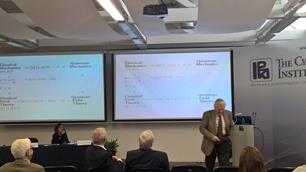 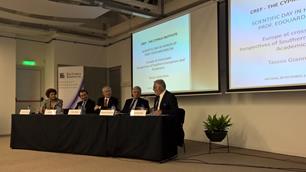