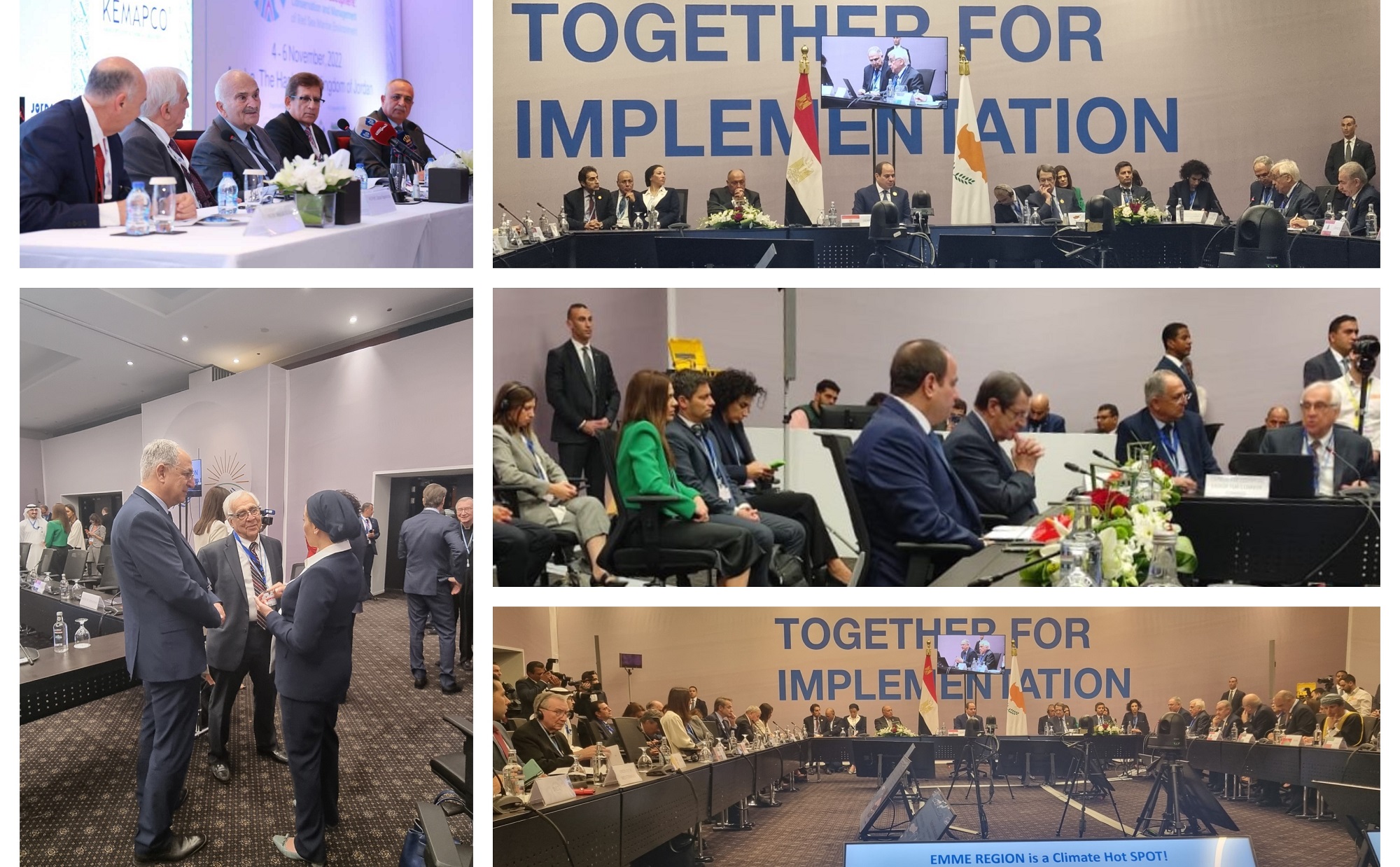 Top left photo is of the Red Sea Ecosphere Conference in Aqaba. Remaining pictures show the COP27 Summit in Sharm-el-Sheikh

The important and leading role of The Cyprus Institute in the global efforts to address the effects of the climate crisis which has become a major problem for the planet, was highlighted once again through the representation of the Institute at the highest level, during several events at the recent COP27 meeting.

The Regional Action Plan to address Climate Change in the Eastern Mediterranean and Middle East (EMME) region, developed within the framework of the Cyprus Government's Initiative (EMME-CCI), was presented at the COP27 Heads of State Summit, held in Sharm el-Sheikh, Egypt, on November 8th. In particular, President Anastasiades was accompanied amongst others in Sharm el-Sheikh by the President of The Cyprus Institute and Advisor and Special Envoy to the President of the Republic on Climate Change, Professor Costas N. Papanicolas, who presented with Minister Kadis the EMME-CCI.
At the Summit, chaired by President Anastasiades and Egypt's President Fatah al-Sisi, a relevant Political Declaration was signed for the official launch of the implementation of the EMME-CCI Initiative in a region that is considered by researchers as a climate-change “hot-spot”. The EMME-CCI Regional Action Plan contains recommendations to address the impacts of climate change based on the findings of 240 scientists who worked under coordination of The Cyprus Institute.
On the side-lines of COP27, Mr. Fabio Montagnino, Head of Innovation and Entrepreneurship of The Cyprus Institute, and Coordinator of the Task Force on Green Economy and Innovation in the Eastern Mediterranean and Middle East, presented the Cyprus Initiative at the Techne Summit in Alexandria, in a talk entitled “Innovation Beyond Borders”. At the same time, Mr. Montagnino participated in a discussion entitled “An economy with benefits for nature, climate and biodiversity”, as well as in an event held as part of the Science Day, entitled “Redesigning strategies in a changing world”.
Prior to the Sharm el-Sheikh Heads of State Summit, The Cyprus Institute was represented by the President of the Cyprus Institute, Professor Papanicolas, and the Director of the Max Planck Institute of Chemistry in Germany, and CyI Institute Professor, Jos Lelieveld, on November 4-5, in the first international “Red Sea Ecosphere Conference” in Aqaba, Jordan. During the event, which focused on the important role of research centers for the protection of the environment in the region, new strategies were presented, as well as best practices, innovative ideas and solutions for environmental management issues.
Specifically, Prof. Papanicolas, focused on the need to implement the regional action plan prepared in the framework of the AMMA countries Climate Change Initiative, making special reference to the need to increase funding for climate change research, as well as to improve the use of technology for the needs of dealing with its effects.
Prof. Jos Lelieveld, presented the findings of a recent study by The Cyprus Institute, which recognizes our region as one of the global climate change hotspots, warning of a temperature increase of 5 degrees Celsius by the end of the century, with unpredictable consequences for humanity.
Remarkably, it is worth noting that internationally renowned Prof. Noam Chomsky, recently referred to the results of a specific study that was produced by researchers of The Cyprus Institute and the Max Planck Institute of Chemistry. Prof. Chomsky indicated, among other things, that there are no words to describe the situation as it is developing in the region of the Eastern Mediterranean and the Middle East, where the dramatic increase in temperature by the end of the century will dramatically reduce survival levels.
Finally, Prof. Papanicolas, along with Assoc. Professor Sorin Hermon, took part in the Conference, entitled “The Future of World Heritage in Difficult Times”, which took place on 16-18 November in Delphi, Greece. At the Conference, which was organized by the Greek Ministry of Culture and Sports and UNESCO, the factors affecting cultural and natural monuments worldwide, as well as ways to mitigate their impact were presented.