Photo: The President of Egypt, H.E. Mr. Abdel Fatah al Sisi, and the President of the Republic of Cyprus, H.E. Mr. Nicos Anastasiades, co-hosted the Summit of the Heads of States of the EMME region, on the sidelines of COP27 in Sharm el Sheikh, Egypt.

The signing of the Political Declaration by countries of the Eastern Mediterranean and Middle East (EMME) region to officially launch the EMME Climate Change Initiative (EMME-CCI) was announced at a Summit hosted by the President of the Republic Mr. Nicos Anastasiades, on 8 November 2022, on the sidelines of COP27 in Sharm el Sheikh, Egypt. The sideline event was also co-hosted by the President of Egypt Mr. Abdel Fatah al Sisi, and was attended by heads of state or government and other high rank government officials and organization representatives.
The signing of the Political Declaration earmarks the official launch of the Initiative, which has been undertaken by Cyprus since 2019. It constitutes a historic milestone for the region’s resilience and prosperity, as it notes the willingness of the undersigned countries to act in a coordinated way to achieve concerted action for the mitigation and adaptation of the climate crisis in the EMME.
Speaking at the event, President Anastasiades warmly thanked President el-Sisi for hosting and co-organizing the sideline Summit, and welcomed participants for the adoption of the EMME-CCI. He stressed that their presence at the Summit is indicative of the collective determination to address the dire effects of climate change in the EMME and that through the scientific work that has been made available through the EMME-CCI, countries of the region now have a better understanding of how the crisis will unfold in the near future, and which actions to implement to address it.

With the signing of the Political Declaration EMME countries are fully - equipped to proceed with the implementation of the relevant regional climate Action Plan, which as President Anastasiades noted emphasizes on transboundary actions, and through it hopes and expects countries of the region will:

In his closing remarks, President Anastasiades commented the guidance of Minister of Agriculture and Environment, Mr. Costas Cadis, and Prof. Costas Papanicolas Presidential Advisor, Special Envoy on Climate Change and CyI President for their collaboration, thanked the scientists for their contribution in delivering a regional climate action plan, and highlighted that the Summit and Declaration mark the common effort to turn the Action Plan into concrete policies and projects.
On his part, the President of Egypt, speaking through an interpreter said, among other things, that Egypt was very eager to participate in this initiative, adding that the EMME region is a climate change hot spot with consequences at all levels. He added that the initiative is a major global mechanism when it comes to actions to deal with the impact of climate change. He noted the Importance of such initiatives, pointing out that the scientific component this initiative it includes is indispensable. Concluding he said that he looks forward to learning more about the initiative and the actions it includes, noting the common interests and collaboration between Cyprus and Egypt.
The President of Iraq Mr. Abdul Latif Rashid, the Prime Minister of Greece Mr. Kyriakos Mitsotakis, the Prime Minister and Minister of Defence of Jordan Dr Bisher al Khasawneh, the  Prime Minister of the State of Palestine Mr. Mohammad Shtayyah, the Minister of Environmental Protection of Israel Mrs. Tamar Zandberg, the Secretary General of WMO Professor Petteri Talas, the Secretary General of the Union for the Mediterranean Mr. Nasser Kamel, the President of the UN Sustainable Development Solutions Network (UN SDSN) Prof. Jeffrey Sachs, the Executive Secretary of the UN Economic Cooperation for Europe Mrs. Olga Algayerova, the COP 26 Regional Ambassador for the Middle East and Africa Mrs. Janet Rogan and the Deputy Director General of FAO Mrs. Maria Helena Semedo, also addressed the event.
It is noted that during the Summit, Dr Costas Kadis, Minister of Agriculture, Rural Development and Environment, presented the EMME-CCI and reiterated its message that “only by acting collectively, decisively and based on sound scientific knowledge can we avoid the worst consequences of climate change in our region”.
Respectively, Prof. Costas N. Papanicolas, Presidential Special Envoy for Climate Change, and President of The Cyprus Institute, presented on the EMME-CCI Regional Action Plan, which contains recommendations for working towards technologically mature and affordable solutions for addressing the impacts of climate change in different sectors, based on the findings of the 240 scientists that worked to form the basis upon the Plan was developed, under the coordination of the Cyprus Institute.
The event was also attended by the Prime Minister of the Holy See Pietro Parolin, Ministers and government representatives from Oman, Lebanon, Bahrain, as well as representatives of international organizations.
More information on the event here. 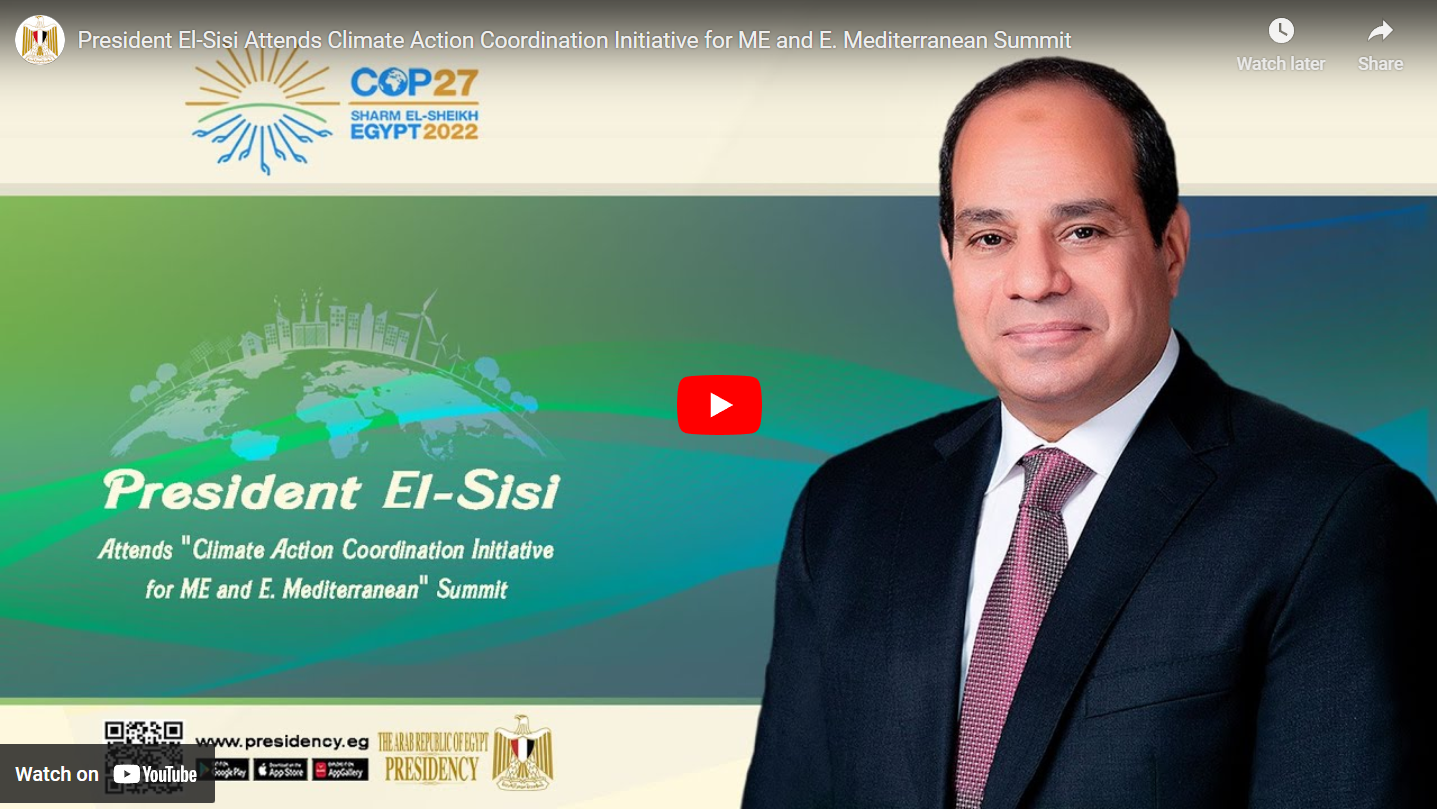 The Path to Regional Climate Action

From Scientific Assessment to Political Declaration

The Signing of the Declaration came as a culmination of the efforts of the Eastern Mediterranean and Middle East Climate Change Initiative (EMME-CCI), which was announced by the Cyprus Presidency in 2019 and spearheaded since by the Cyprus Government.
This announcement came following strong warnings from the international scientific community that the EMME region is a global climate change “hotspot” and calls for urgent, coordinated regional action to address escalating climate change regional impacts, which emerged in the context of the 1st International Conference on Climate Change in the EMME, which was organized by The Cyprus Institute in May 2018, in Nicosia.
Countries of the EMME region are already witnessing common challenges, such as record high temperatures, devastating fires, increased water scarcity, droughts, floods and extreme weather patterns. According to recent studies led by researchers of the Cyprus Institute, this situation is only due to intensify, with the region currently at risk of an overall warming of 5°C by 2100, unless urgent coordinated climate action is initiated by the countries of the region.
The Cyprus Institute (CyI) is honored to have been invited to coordinate the scientific aspects of the EMME-CCI, bringing together 240 scientists and organizing them into 13 Scientific Thematic Task Forces whose dedicated input has provided the scientific underpinnings and recommendations upon which the EMME-CCI’s proposed regional actions have been based on.
The CyI is also honored to have supported the transition from scientific recommendations to policy discourse, by contributing to the drafting of the proposed Regional Climate Action Plan for the EMME.
Beyond this, the CyI remains dedicated to continuing to support the progress of all aspects of the EMME-CCI, having being appointed to host its Interim Secretariat.

Towards Transboundary Mitigation and Adaptation Actions

As Prof Costas N Papanicolas, CyI President and Presidential Special Envoy on Climate Change, has previously highlighted, the EMME-CCI is not only about understanding the extent and intensity of the effects of the Climate Crisis, but mainly about understanding the risks in every sector of the economy and social activity, along with planning and taking measures to mitigate them.
In order to achieve this goal, it is necessary to have the most detailed and accurate modelling on a regional basis, otherwise the planning will be impressive, but non-effective.
The Regional Action Plan proposed by the EMME-CCI, based on the recommendation of 240 scientists which worked under the coordination of the Cyprus Institute, includes proposed actions aimed at the identification, development and adoption of technologically mature and affordable solutions for addressing the impacts of climate change in different sectors, and provides a solid science-driven roadmap to address the unfolding crisis.
The signing of the EMME Climate Declaration at COP27 is undoubtedly a huge achievement, but the greatest challenge – the timely and successful implementation of transboundary mitigation and adaptation actions – still lies ahead of us.
Concrete collaboration for, and commitment to, the implementation of transboundary actions is crucial, with a number of projects identified in regional priority areas including, more detailed modeling of impacts, observation data sharing, clean energy at affordable competitive prices, addressing threats to costal systems due to sea level rise, city emission reductions, and creation of jobs for green development.

The EMME-CCI at a Glance 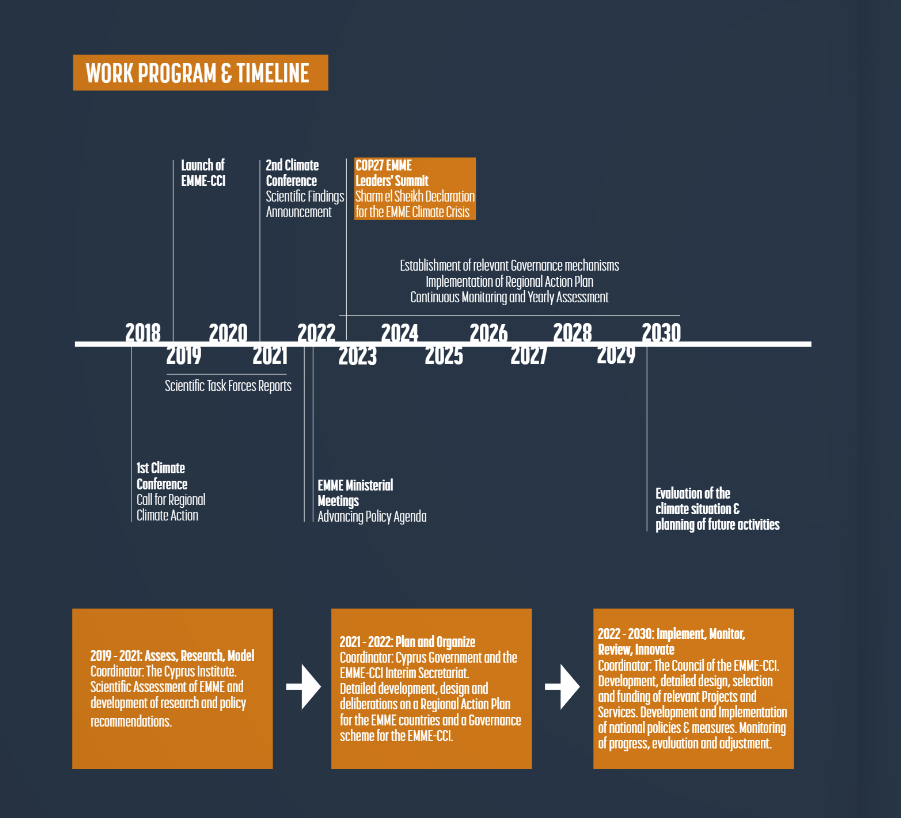 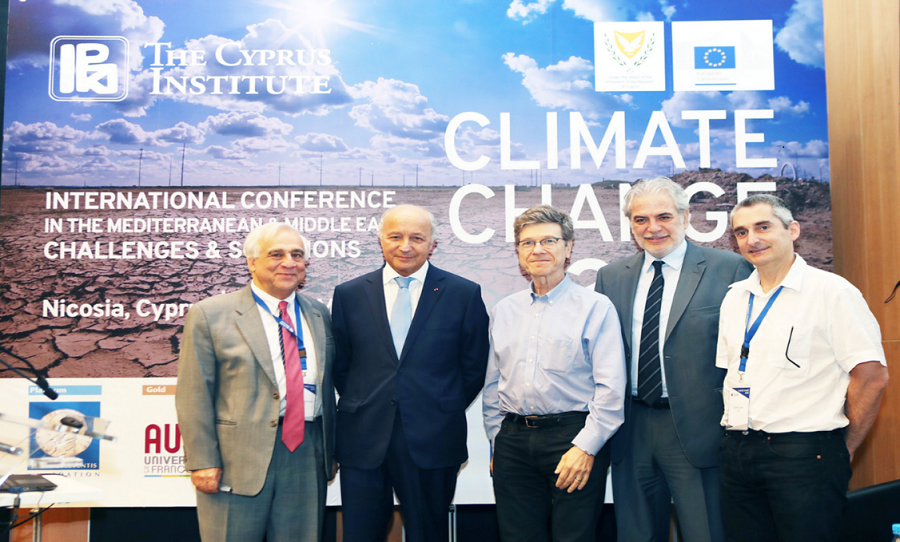 2018. During the 1st International Conference on Climate Change in the EMME, organized by The Cyprus Institute, and attended by eminent regional and international leaders and decision-makers, scientists drew attention to EMME’s status as a climate change hotspot and issued a call for urgent regional climate action. 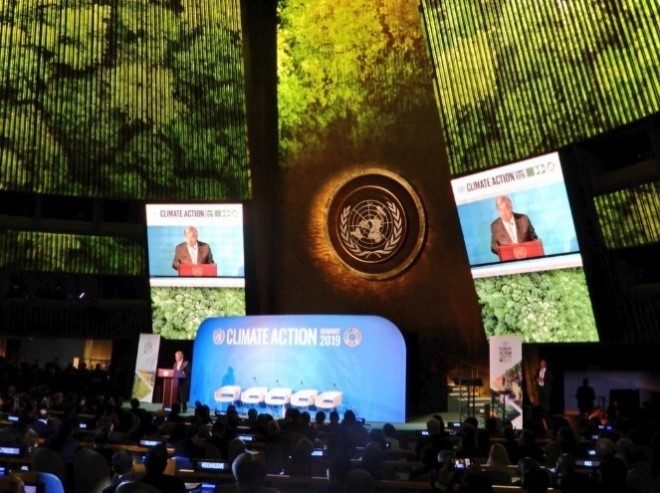 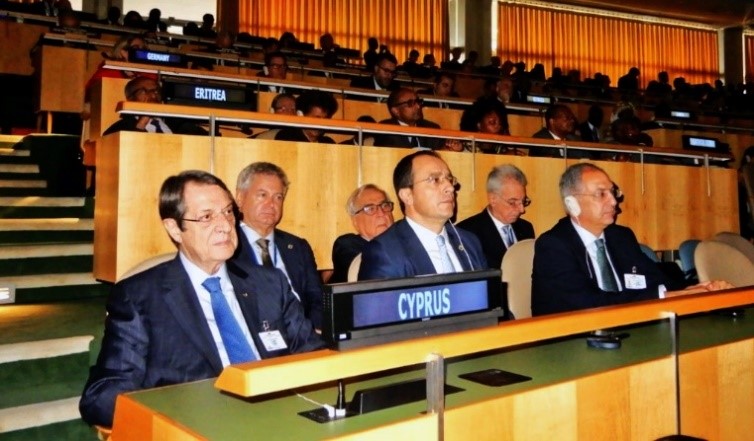 2019. President Nicos Anastasiades, and the Cyprus delegation, which included Prof Papanicolas, CyI President, Advisor to the President of the Republic of Cyprus and Special Envoy on Climate Change, submitted Cyprus’ proposal for cooperation and coordination on action on climate change for countries in the Eastern Mediterranean and Middle Easte (EMME) region to the UN Secretary-General Antonio Guterres and 13 regional heads of state. 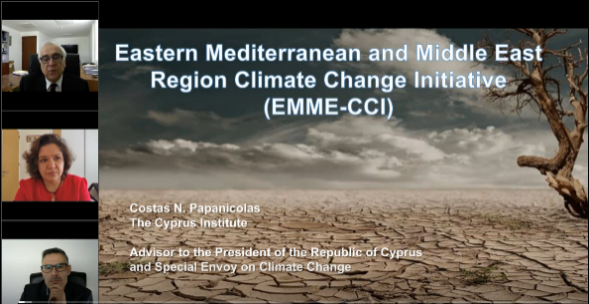 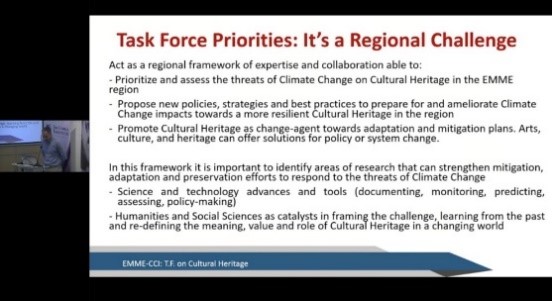 2021. The 2nd International Conference on Climate Change in the EMME, took place online and Cyprus, organized by The Cyprus Institute. The Scientific Findings and Recommendations of the 240 scientists which worked under the coordination of the Cyprus Institute, were announced and discussed with regional and international policy-makers, leaders and decision-makers. 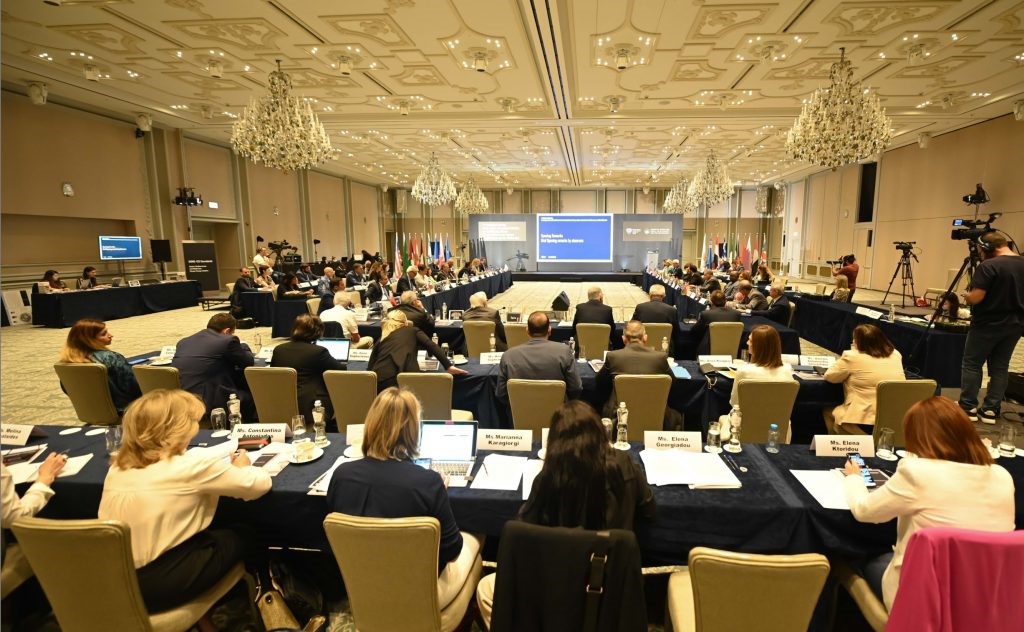 2022. EMME-CCI Ministerial Meetings were held in February (hybrid/Nicosia) and June (Limassol) 2022 aimed at advancing the policy agenda towards an EMME Leaders’ Summit for the official launch of the EMME-CCI. The Meetings were organized by the EMME-CCI Interim Secretariat, whose hosting has been assigned to The Cyprus Institute.

2022. The Declaration officially launching the EMME-CCI was Announced at the EMME Leaders Summit held on 8 November 2022 at COP27, Sharm-el-Sheikh, Egypt.