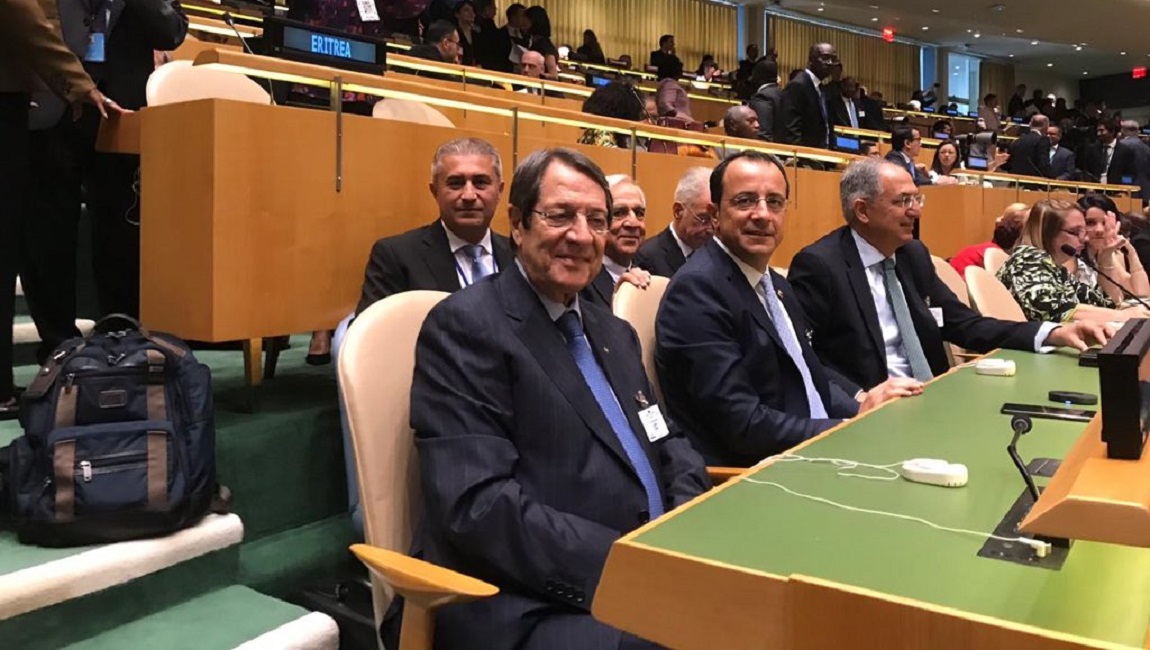 On Monday, September 23rd, 2019, President Nicos Anastasiades, accompanied by Prof Papanicolas, Advisor to the President of the Republic of Cyprus and Special Envoy on Climate Change, submitted to UN Secretary-General Antonio Guterres and 13 regional heads of state, Cyprus’ proposal for cooperation and coordination on action on climate change for countries in the eastern Mediterranean and Middle Eastern (EMME).

The proposal was submitted as part of President Anastasiades’ participation in the UN Climate Action Summit, and is Cyprus’ response to multiple scientific studies that classify the EMME region as a global ‘climate hot-spot’, with particularly high vulnerability to climate change impacts. It closely follows the results from the successful 2018 Climate Change International Conference that CyI organized on this subject, with the participation of over 300 delegates from 35 countries. The climate change initiative and sustainable development was also the focus of a meeting that took place earlier this year at the Presidential Palace between President Anastasiades and Professor Jeffrey Sachs, world-renowned professor of economics at Columbia University, senior UN advisor and a leader in sustainable development, and member of CyI’s Board of Trustees.

“Due to its position and its excellent relations with the countries of the Eastern Mediterranean and Middle East, Cyprus is able to play an important coordinating role in combating climate change on a regional level”, noted Agriculture, Rural Development and Environment Minister Dr. Costas Kadis. The minister, who accompanied the President at the UN summit, discussed Cyprus’ initiative on Sunday September 22, during meetings he had with his counterparts from Eastern Mediterranean and Middle East countries.

To achieve the objective of developing a Regional Action Plan on Climate Action Coordination, a detailed work programme has been developed, consisting of two distinct components: a scientific and an intergovernmental component.

The proposal has been presented  to the leaders of Egypt, Greece, United Arab Emirates, Jordan, Iraq, Iran, Israel, Qatar, Kuwait, Lebanon, Oman, Palestine and Saudi Arabia, and  is divided into three phases.

The first phase will involve the scientific component for developing a regional action plan via up to 12 thematic task forces, to be coordinated by the Cyprus Institute.

The task forces will focus on collecting existing knowledge, in order to assess the situation, identify gaps in research and policy needs and provide a ‘toolkit’ of possible actions to address the climate challenges in the region.

Thematic reports ( ‘White Papers’) will be produced, which will then feed into the Comprehensive Scientific Report that will contain an overarching conclusion, as well as technologically matured and economically affordable solutions for addressing the impacts of climate change in different socioeconomic sectors. Phase 1, which consists of the Scientific activities will be led by Prof Costas N. Papanicolas. The final report is to be presented at the second Climate Change International Conference to be organized by The Cyprus Institute in October 2020.

Phase 2 involves the intergovernmental component for the development of the regional climate action plan. A ministerial meeting is set to be organised by the Cyprus government in February 2021, to be followed by an EMME leaders’ summit in the summer where a regional action plan is expected to be adopted.

Finally, Phase 3 will oversee the implementation of the regional action plan.