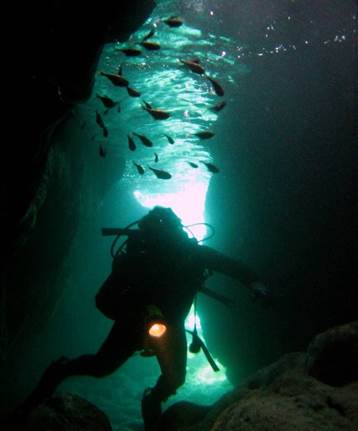 Ecological studies require a certain amount of exploration. At the Akamas Peninsula, CyI researchers together with their collaborators from NGO Enalia Physis Environmental Research Centre, visited a rare kind of cave, found only in few places in the Mediterranean. Caves are unique ecosystems, biodiversity hotspots due to their isolation with the outside ecosystems, they host rare species specialised to live under dark and nutrient poor conditions. Marine caves are considered a Priority habitat for protection by the Natura 2000 Habitats Directive Annex I.

The scientific study and findings, from the two visits performed to the cave, are described in order to testify the uniqueness of such amazing sites.

A rather narrow entry point on a sea wall, leading to a narrow passage, takes the divers deep into the cave. In the darkness, with help from flashlights an amazing spectacle is revealed: strange flat stalactite looking structures, formed purely by living organisms (biogenic) protruding horizontally from the wall. Shrimps were found swimming about; they are typical species to be found in caves. Then groupers appeared swimming proudly. Sponges in shade of light yellow-brown adorn parts of the stalactites and cave walls, while serpulid worms made their shy exit from their tubes and opened up their beautiful crowns, in hope of catching some food. 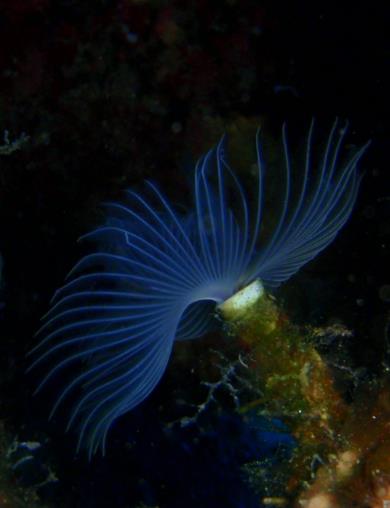 Samples were collected of the biogenic stalactites and the crew were brave enough to catch a fast swimming shrimp for later inspection. Photos of the cave, its structure and inhabitants were taken systematically. A 3D model of the cave is currently being produced to help with spatial understanding of biological functions. Many questions have risen from this exploration trip. Why do the stalactites grow horizontally? Do currents affect stalactite size? Are there other organisms living on it? Is the shrimp an endemic cave species? Are there more caves like this one? So many questions…

Italian scientists have published papers on a similar cave giving us a foundation to build upon. First analysis of the stalactite confirms it is biogenic and most probably made up of serpulid worm tube skeletons and marine debris (the marine version of dust, which travels from the surface down to the bottom of the sea, providing nutrients to deep waters). Tiny bryozoans (moss animals) found are being identified by a student who has spent hours under the microscope scanning the stalactite in search for species. A rare miniature coral species has been found on the stalactite sample, making it one of the few samples ever reported. Tiny brachiopods (lamp shells) in a dark brown colour were also found on the stalactite and their identification is under way. Core samples from along the axis of the stalactite have been sent overseas to help put a date on this wondrous structure. The analysis is still under way.

Many of the questions remain unanswered and the Marine Environment Team and NGO Enalia Physis have begun an outreach to collaborate with other specialist in the Levantine in order to perform a throughout study of this magnificent place. A search for other places like this one on the coasts of Cyprus has commenced and discoveries are being made. If you are diver and have encountered an ecosystem similar to the one described above, please contact us. Public input is much appreciated.