Clerides studied law in London. During the World War II he joined the Royal Air Force and flew bombing missions as a tail gunner. His plane was shot down and he was captured by the Germans. After the war, he was cited for distinguished service.

Upon his return to Cyprus he participated in the 1959 London Conference on Cyprus and during the transitional period, from colonial administration to independence (1959–1960), he served as Minister of Justice. During the same period he was Head of the Greek Cypriot delegation in the Joint Constitutional Committee. In July 1960, he was elected to the House of Representatives, which elected him as its first President. In 1993 he was elected as the fourth President of Cyprus. During his second term as president, he initiated negotiations with the European Union, which led to Cyprus’ accession in 2004.

Glafkos Clerides played a defining role in launching The Cyprus Institute. It was during his presidency that the initiative of the then Government owned Cyprus Development Bank (led by John Ioannides and Andreas Mouskos) launched the activities and studies on how to reinvigorate Cyprus’ Economy and transform it into a knowledge-based economy in view of its pending accession to the EU. One of the most notable of these studies (J. Joannides, E. Moniz, G. Ourisson, F. Rhodes H. Schopper, A. Stamatis, C. N. Papanicolas - Coordinator) is the one that led to the creation of The Cyprus Institute. The 2002 Convocation of International Scholars that validated the study culminated with a meeting at the Presidential Palace with President Clerides presiding (with President G. Vasiliou playing a most important catalytic role at the same time and actively participating in the process). His Government enthusiastically endorsed the findings of the study and took the necessary steps for a rapid launching of what was to become The Cyprus Institute.

CREF and CyI were established in 2004 and 2005 respectively and President Clerides (whose term had ended in 2003) lent his support and prestige to the new Institution by becoming one of the Founding Trustees of the Institute. He remained as Trustee for the maximum period allowed (eight years) and subsequently became an honorary Trustee.

It is apparent that The Cyprus Institute would not have been created without his support and his vision on what Cyprus ought to become. The launching and establishment of The Cyprus Institute is perhaps a small entry in his long list of accomplishments in Cyprus and internationally - most of them of truly historic proportions. The Institute owes him a great deal.

The Board and the management of the Institute will announce decisions on how to honor the memory of President Clerides for his contributions. The Cyprus Institute will remain closed tomorrow (19 November) the day of his funeral, a day of national mourning in Cyprus. 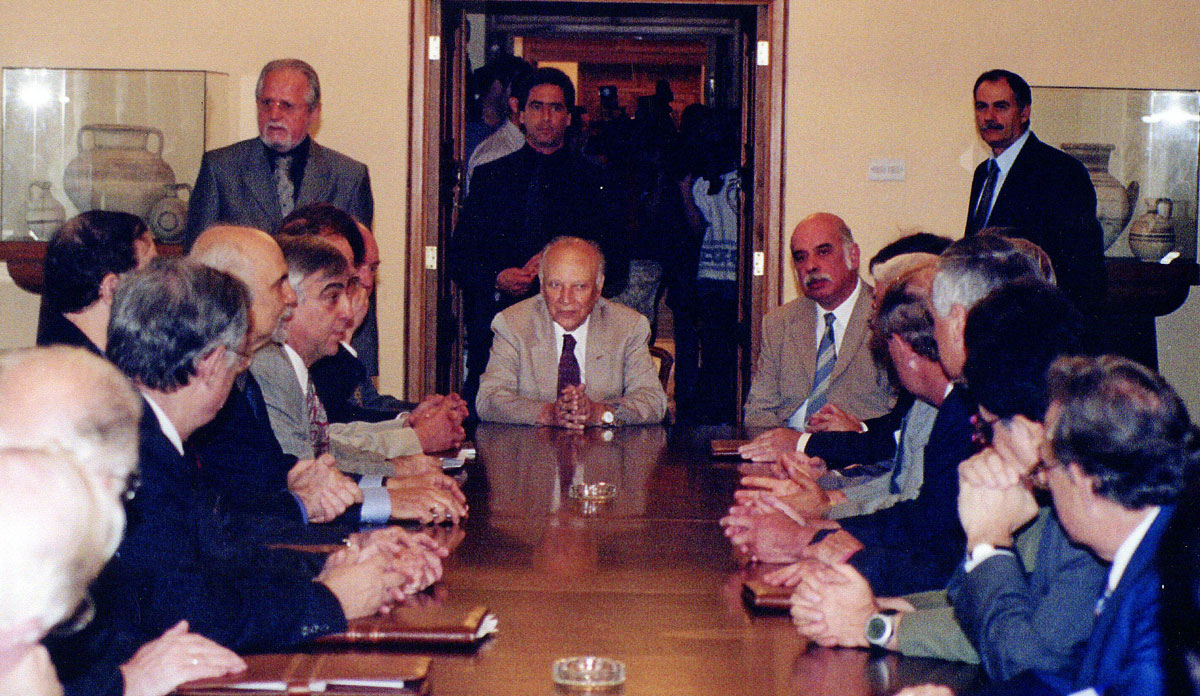 14 June 2002: A convocation of international scholars for the planning of the Cyprus Institute, at the Presidential Palace with H.E. the President of the Republic of Cyprus Mr. G. Clerides.