A joined General Assembly meeting between the FP7 project PERSEUS (Policy-oriented marine Environmental Research for the Southern European Seas) and the COCONET (COast to COast NETworks) project took place in Athens, Greece this last January 27th and 28th. The meeting was followed by a two day Scientific Workshop of PERSEUS. These four days were devoted to marine research in the Mediterranean and the Black Sea and were attended by Dr Carlos Jimenez of EEWRC’s Marine Science Group (MSG). 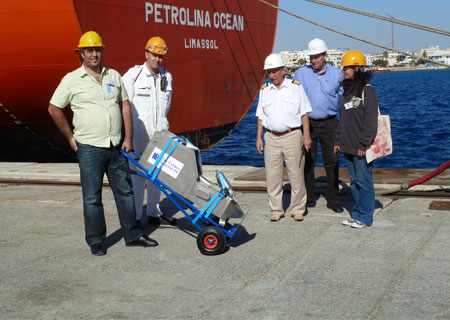 The MSG is participating in PERSEUS with the Continuous Plankton Recorder (CPR) initiative. In the context of the project, the CPR will be used for the first time in the eastern Mediterranean. Participants of the workshop welcomed this initiative with great anticipation and enthusiastic support.

Since a ship of opportunity is needed for employing the CPR, a collaboration between The Cyprus Institute and the shipping industry has been initiated. The CPR tows will be carried out with a Cypriot vessel (Figure 1), made available by Columbia Shipmanagement and the ship owners Lefkarites & Brother Ltd. This constitutes an important partnership since it keeps CPR tows affordable and environmentally friendly.

The CPR device enables the continuous collection of plankton on a piece of moving silk screen, while the ship is in transit (Figure 1b). Later in the laboratory, the screen is cut into individual strips, which represent sampling over 5 nautical miles. The analysis of the individual strips enables the mapping of plankton abundance and diversity along the route travelled by the ship.

Plankton represents the smallest plants and animals of the sea, on which all other organisms feed on. However, plankton also includes the larvae of fish, molluscs, crustaceans and many more animals. Analysing the composition of plankton provides vital information, since it represents the lower end of the marine food web and the power of species larvae recruitment. Thus, a better understanding of species composition and abundances will contribute in the assessment of ecosystem health of the eastern Mediterranean Sea. Investigation of the planktonic larvae in the region, will also shed light on the migration of Lessepsian species (native species of the Red Sea) through the Suez Canal into the eastern Mediterranean Sea. This will facilitate an evaluation of species invasions and help in risk assessments.

In order for the CPR equipment to be deployed and maintained properly, Dr Carlos Jimenez attended a course provided by Sir Alister Hardy Foundation for Ocean Science (SAHFOS) foundation in July 2013. SAHFOS is the primary producer and a leading institution in plankton monitoring and assessments of the North Sea/Atlantic. Gaining insights into the next step of the observations/assessments, the handling of the silk screen containing the sampled plankton, MSc Rana Abu Alhaija attended another course at the SAHFOS headquarters. This will be followed by a taxonomic identification course that will take place later on this year. The first samples will be collected in the Levantine this spring, which will kick start a long term evaluation of the planktonic composition of the eastern Mediterranean.