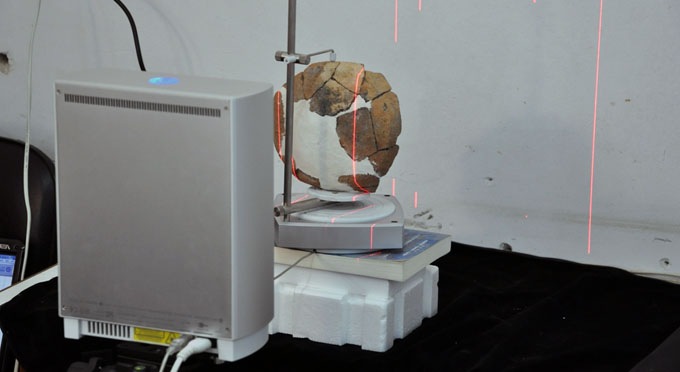 The Cyprus Institute hosted last month, a delegation of high ranking scientists from the Israel Antiquities Authority (IAA), the largest archaeological scientific and administrative body in Israel in charge of the research, curation, preservation, conservation and public outreach of Israel’s cultural heritage patrimony. Dr. David Gabai, Deputy Director for computing systems and Dr. Gideon Avni, Deputy Director for research at the IAA visited CyI to be informed on the techniques and methods used by the scientists of The Science and Technology in Archaeology Research Center (STARC) of the Institute.

During their visit, in an interview with the CNΑ, Dr. Gideon Avni, and Mr. David Gabai, outlined their vision of a database to hold information about Cyprus’ and Israel’s large number of antiquities.

“The expected outcome is to create a list of projects in which Israeli archaeologists and Cyprus archaeologists from The Cyprus Institute and the Antiquities Department will be collaborating”, said Avni and described their visit to CyI as “very fruitful”. “We were very much impressed from the high level of research and the numerous projects that are being conducted there,'' he noted.

“Both countries, have one of the richest concentration and importance of archaeological sites anywhere, with influences that were passing through the Eastern Mediterranean, there is an enormous amount of database that is compatible. We are looking to put together what we have in Israel, what you have in Cyprus in a way that this database will be put into the knowledge of scholars, and one of the aims is to make this database accessible for all departments. And here CyI has the infrastructure that relates to this”, he added.

On his part Gabai said “we came to Cyprus to see what type of technologies are used to aid archaeologists to do the research, collecting the data, and to find out how we can use this technology, how we can contribute to Cyprus’ databases and making databases accessible to each other”.

Avni said “we are dealing with an enormous amount of data. Millions of artifacts and thousands of sites and only the pictures that we have in our archives are tens of millions of pieces. Nobody can know what exists unless they spend half their lives searching for it. There is a huge amount of information that needs to be pieced together, and this is our initiative with The Cyprus Institute and other places in Europe, how to make this material accessible”.