Following the visit by His Holiness Pope Francis to Cyprus on December 2, 2021, Professor Costas Papanicolas, Advisor to the President of the Republic of Cyprus and Special Envoy of Climate Change and President of the Cyprus Institute, and Professor Fadi Comair, Director of the Environment Energy and Water Research Center (EEWRC), were invited to have a private Audience with Pope Francis on May 16, 2022 at the Vatican. The meeting was a result of the strong ties between the Institute and the Vatican.

At the meeting, Prof. Papanicolas relayed to His Holiness Pope Francis the invitation by the President of the Republic of Cyprus, H.E. Mr. Nicos Anastasiades, for the Vatican to participate as an observer state in the Eastern Mediterranean and Middle East Climate Change Initiative (EMME-CCI).The EMME-CCI was launched by President Anastasiades in 2019, and within its framework the Cyprus Government has been coordinating efforts towards the shaping of a Regional Climate Action Plan for the countries of the Eastern Mediterranean and Middle East (EMME) region. In the context of the EMME-CCI, over 200 scientists were coordinated by The Cyprus Institute, to produce scientific reports on the state of climate in the EMME, and policy recommendations for effective mitigation and adaptation to the climate crisis. These reports have provided the basis for ongoing intergovernmental discussions for the shaping of a concerted regional approach to climate action, which will culminate in an EMME Heads of State Summit on October 25, 2022. The Vatican was invited to participate in the Summit and in the preceding Ministerial Meetings, the next one scheduled for June 7, 2022.

The Pope reiterated his deep concern about the effects of Climate Change and the human suffering it will induce and in particular refugee flows. The Papal Encyclical “Laudato si’” issued in 2015 and articulates in detail his concerns about climate change and his vision on how to take relevant action, provided the basis for an extensive discussion on how it could be used to enhance the EMME-CCI. It was agreed that EMME-CCI addresses the urgent need for action to mitigate climate change and ameliorate its impacts.

Pope Francis accepted the invitation by the President of the Republic, and Vatican has become an observer state to the EMME-CCI. Moreover, Pope Francis advised Prof. Papanicolas and Prof. Comair to meet with the designated Vatican cardinals responsible for the dicasteries (Vatican State Ministries) to follow up on climate change and other related issues.

In this context, Profs Papanicolas and Comair and the Ambassador of Cyprus to the Vatican, H.E. Mr. George Poullides, had meetings at a number of dicasteries, including Foreign Affairs, Integral Human Development and Sciences and Social Sciences. Particularly engaging was the meeting with Cardinal Turkson, Chancellor of the Pontifical Academies of Sciences and Social Sciences, where the importance of cooperation on scientific issues relating to the Climate Crisis but also to cultural heritage were extensively discussed.

Professors Papanicolas and Comair also had an additional meeting on issues relating to the UN Agencies in Rome (the Food and Agriculture Organization (FAO), the International Fund for Agricultural Development (IFAD), and the World Food Programme (WFP), to which Ambassador Poulides is also accredited as Permanent Representative. The meeting was also attended by Mr. Marios Georgiades, Deputy Permanent Representative. Within this framework, it was decided that the current opportunities for collaboration and knowledge sharing, in the field of climate change and food security between the CyI and FAO, should be pursued. Overall the meeting underlined the necessity to further develop and follow-up in a concrete way the various possibilities of cooperation both with the FAO, the Vatican Dicasteries (Ministries), as well as the Catholic Network Universities.

At the meeting, Prof. Papanicolas offered a special gift to Pope Francis highlighting the contribution of CyI interdisciplinary research in the study and preservation of the past. Specifically, the gift consisted of an exact replica of a detail from the 14th century wall paintings in the catacomb of Saint Solomoni in Paphos. The particular detail depicts the hand of a Church Father holding an opened scroll. Devotional graffiti in Greek, Armenian and Latin, tentatively dated in the 15th-17th centuries, were incised directly on the fresco surface. The graffiti testify the passage of pilgrims and migrants and underline the long continuity of the cult and the diachronic role of Cyprus as a place of pilgrimage and migration at the crossroads of the Mediterranean, a theme that was underscored by Pope Francis himself during his last visit to the island.

The replica of the fresco was possible through the 2D and 3D digital imaging of the catacomb by The Cyprus Institute and the Andreas Pittas Art Characterization Laboratories Labs (APAC Labs) of the Science and Technology in Archaeology and Culture Research Center (STARC), which was led by graffiti heritage expert Dr Mia Trentin. The fresco detail copy was realized with the collaboration of Dr. Iosif Hadjikyriakos, painter and art historian. 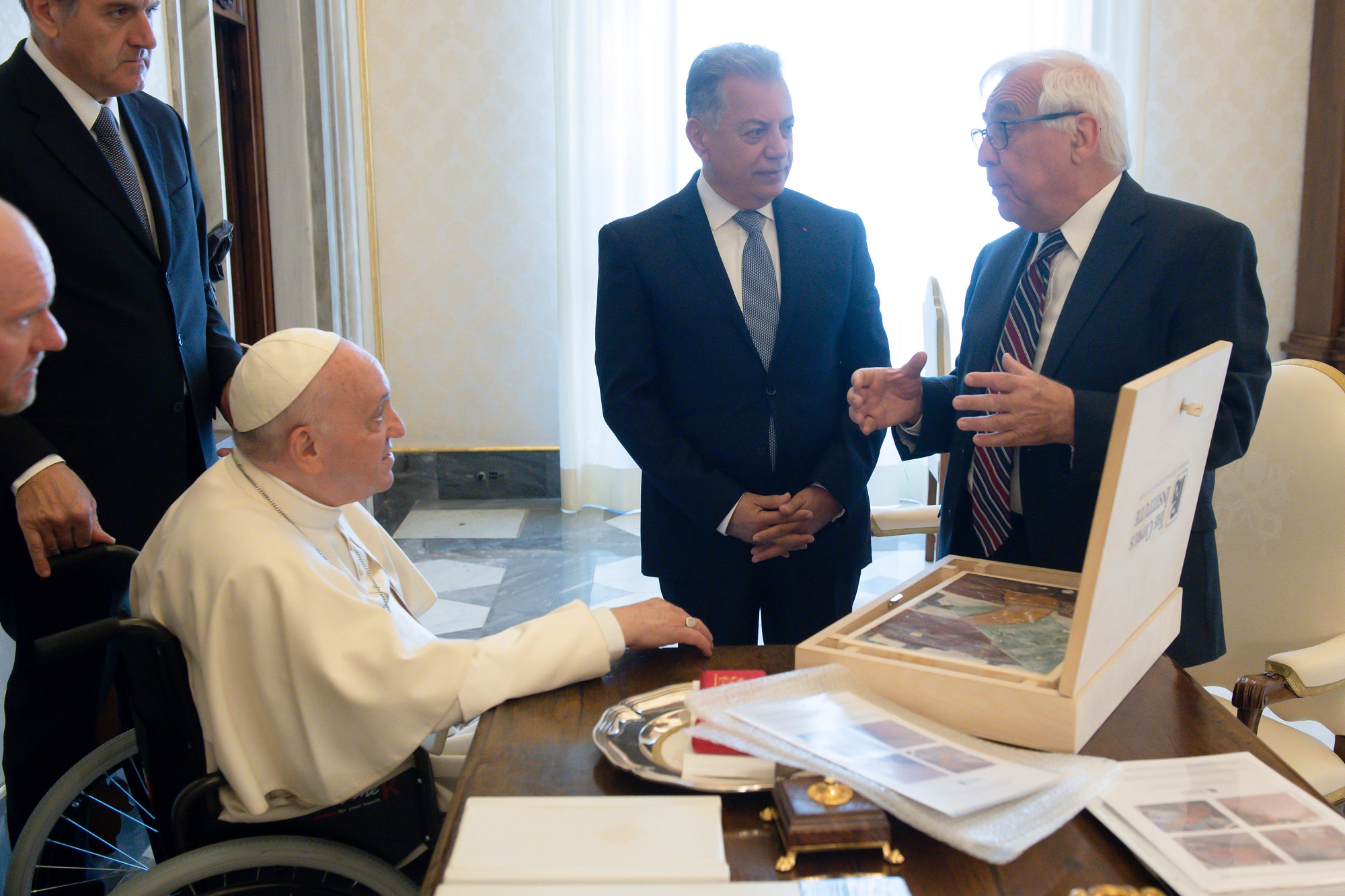