Agriculture in the Mediterranean region is constrained by limited rain and highly variable climate conditions. Irrigation forms an important means of stabilizing and increasing agricultural production in these environments. Since its independence in 1960, Cyprus has made important investments in the agricultural sector through the establishment of dams and irrigation networks. However, decreasing precipitation trends, rising water prices and a changing climate are posing new challenges. The overall goals of this project are (1) to provide recommendations for climate change adaptation for the agricultural sector in Cyprus and the wider Mediterranean region; (2) to establish a consortium of excellence in natural resource management research in Cyprus for tackling the challenges imposed by climate change on agriculture in the Mediterranean region. The project will document and analyze available knowledge and data, fill in critical knowledge gaps and develop the Cyprus green-blue water model to compute sustainable irrigation water supplies, agricultural water use, crop yields and economic indicators. Stakeholder meetings will be held at the initial and final stages of the project to gather inputs and disseminate results. 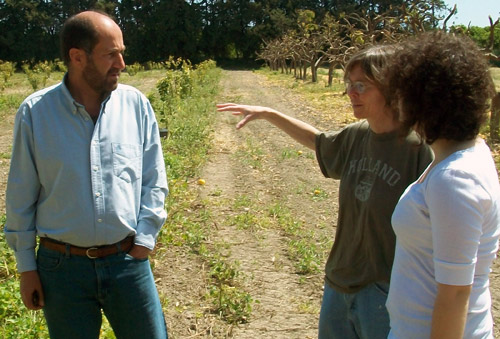 The project will make use of an intelligent predictive modelling and mapping approach to generate a 1:50,000 soil map for Cyprus with the necessary soil physical properties required by the model. Agro-climatic zones will be mapped and an agro-meteorological database will be developed with daily data for the period 1981-2010. Agricultural productions will be characterized for all agro-climatic zones, with special attention for promising climate-resilient, environmentally-friendly and economically-efficient systems. Data from long-term trials on barley and potato will be exploited to assess the effects of climate on production of two of Cyprus’ most important crops, in terms of area and production. A 3x3x3 matrix of policy and economic scenarios will be developed with the advice of local government officials, representing 3 levels of water prices, 3 levels of subsidy measures, and 3 agricultural input/output price scenarios. Climate change projections for 2021-2050 will be developed for Cyprus, using a combination of dynamical and statistical downscaling.

The above research outputs will be brought together in the Cyprus green-blue-water model, which will use a consistent computational framework and modular structure, to analyze the effects of the 3x3x3 matrix of policy and economic scenarios under the climate change projections for 2021-2050. A set of agricultural production and water use performance indicators will be computed by the model, including green and blue water use (m3/ha), crop yield (ton/ha), crop water productivity (kg/m3), subsidy support (€/ha), net value of crop production (€/ha) and economic water productivity (€/m3). All indicators will be computed and mapped at the field, community, agro-climatic zone and country level, to facilitate the extraction of policy recommendations.

Agroclimatic and Agro-ecological zones of Cyprus, by Stelios Pashiardis. 2013.

The Effect of Climate (Temperature) on Potato Production in Cyprus, by Sophocles Gregoriou and Eleftherios Konstantis. 2014.

The creation of a gridded dataset for meteorological variables for 1981-2010 and 2021-2050, by Corrado Camera, Adriana Bruggeman, Panos Hadjinicolau, Stelios Pashiardis, Manfred A. Lange. 2013.

Email: This email address is being protected from spambots. You need JavaScript enabled to view it.