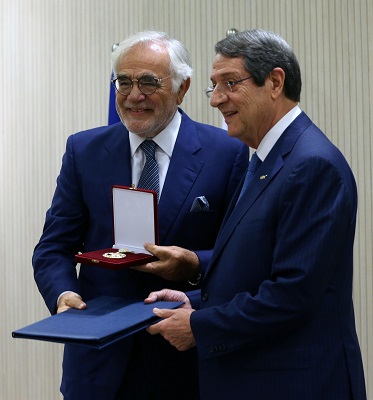 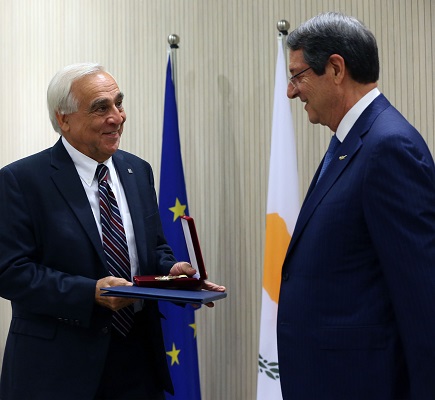 At a ceremony held at the Presidential Palace on Tuesday, September 3, 2019, the President of the Republic, Mr. Nicos Anastasiades, awarded the Medal for "Outstanding Contributions to the Republic of Cyprus " to Dr Andreas Pittas, founder of the pharmaceutical company Medochemie Ltd and Chairman of the Executive Board of The Cyprus Research and Educational Foundation (CREF), and to Costas N. Papanicolas, Professor and President of the Cyprus Institute.

In his address at the awards ceremony, the President of the Republic emphasized that the valuable scientific - and not only - contributions of Dr. Pittas and Professor Papanicolas to our society and our culture, are widely recognized.

Dr. Andreas Pittas is founder of Medochemie Ltd and holds prominent positions in leading organizations such as the British Drugs Association, the Royal College of Physicians, the Cyprus International Institute of Management, the Cyprus Research and Education Foundation, and The Cyprus Institute. He has also served as an honorary member of the Boards of Directors of various organizations and was Vice-President of the European Union of Generic Medicines in Brussels.

At the same time, his contributions to culture and the arts, as well as to scientific research, are widely recognized. Nurturing a special love and interest in these areas, he contributed his personal dedication and substantial financial support for their development through a series of actions for research, innovation, the arts and cultural heritage of Cyprus.

These contributions were recognized by his awarding of an honorary Doctorate from the Science and Technology in Archeology and Culture Research Center of the Cyprus Institute. As Chairman of the Executive Board of the Cyprus Institute, Dr Pittas has contributed decisively to the Institute's excellence, as well as to the development of scientific and technological methods in Art History and Archeology.

Receiving the Medal from the President of the Republic, Dr. Andreas Pittas said: “It's a great honor. Cyprus can play a larger role than the size of its population in many areas and not just those I have encountered. On this occasion, I would like to commend you for the future establishment of a Ministry of Research and Innovation, an act that will contribute to a prosperous future for our country. I would like to warmly thank you for the support and faith you have shown in The Cyprus Institute, which has become an eminent, world-class center of excellence."

Following his university studies, Professor Costas Papanicolas held teaching appointments at leading Universities and had particular scientific and research interests in the fields of nuclear, particle and medical physics, energy science and research, energy policy and innovation, and has a remarkable scientific body of work and publications.

He has been internationally recognized and honored for his scientific achievements and is one of the twelve newly elected founding members of the Cyprus Academy of Arts, Sciences and Letters. In fact, because of the importance of his experience, knowledge and expertise in environmental protection and sustainable development and in managing impacts and mitigating climate change, he has been appointed by the President of the Republic as Government Advisor and Special Envoy on Climate Change.

Professor Papanicolas was also honored for his special contributions to the accreditation of Private Higher Education Institutions in Cyprus, the design of undergraduate and graduate courses and curricula, the establishment of departments at academic institutions including the University of Cyprus, and the establishment and operation of the Cyprus Research and Education Foundation and The Cyprus Institute.

Receiving the medal, Prof. Papanicolas thanked the President of the Republic for his continuing support, and noted that "with much generosity this medal honors my contribution to the Republic of Cyprus. I felt that my home country gave me yet another opportunity to contribute to society, which is a privileged opportunity for every scientist, intellectual, and every citizen, to go beyond his or her own personal interests and to taste the ultimate 'bliss' (eudemonia according to Aristotle), in the sense of their participation in the common affairs”.

"If any of these projects are worthy of attention and offered to the community as a whole, this is primarily due to the trust of those assigning the projects, and to the involvement of unrivaled distinguished partners. Indicative of this, is the composition of the Institute's Board of Trustees that included former President Vasiliou and Dr. Pittas. I have no words to thank them, and there are too many to mention – including some that are here among us this evening. "

It is worth noting that in the addresses of the President of the Republic, of Dr. Pittas and of Prof. Papanicolas, a common theme was the significance of The Cyprus Institute and its important role for research, education and innovation for Cyprus and the region.

Read the address by the President of the Republic, during the ceremony.