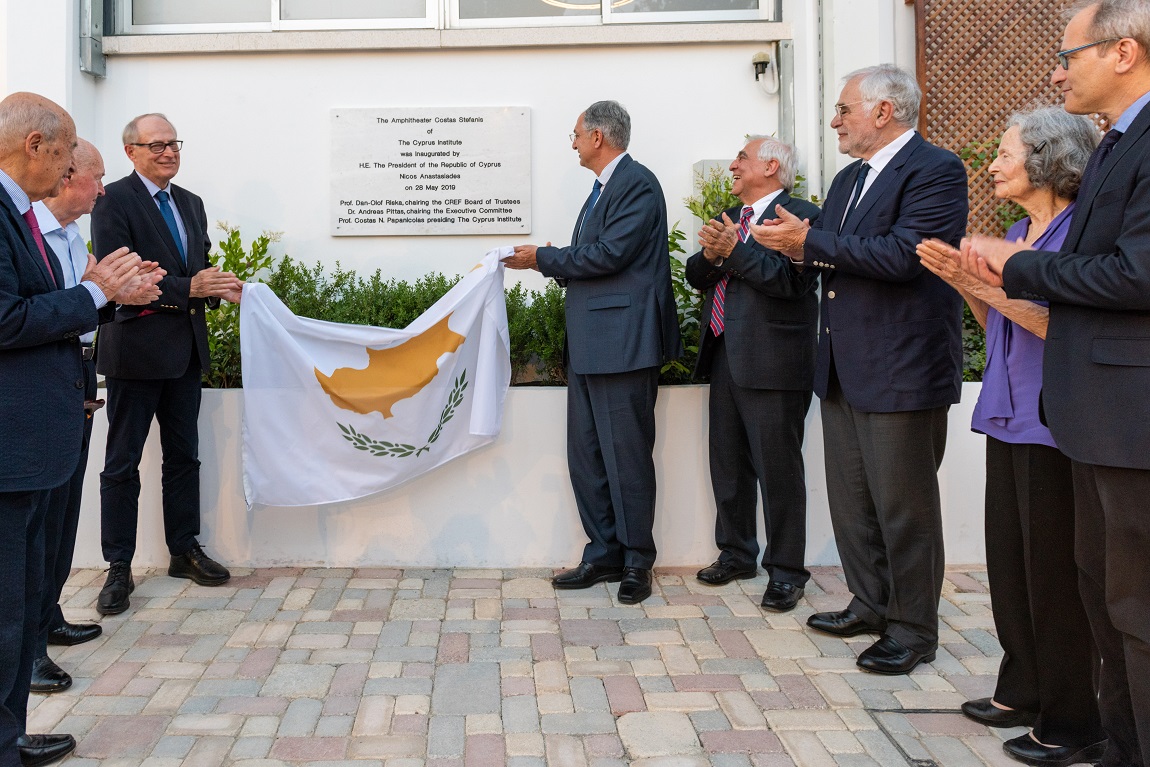 An event in memory of Professor Costas Stefanis (1928 - 2016), who played a key role in the establishment and development of The Cyprus Institute and the Cyprus Research and Educational Foundation, took place on Tuesday evening at the new Cyprus Institute amphitheater, that now bears his name.

The event was attended by Minister of Agriculture, Rural Development and the Environment, Costas Kadis on behalf of the President of the Republic, by former President of the Republic, George Vassiliou, former Greek Prime Minister, Costas Simitis, and the President of The Cyprus institute and Chief Executive Officer of the Cyprus Research and Educational Foundation, Professor Costas Papanicolas, in the presence of Prof Stefanis’ wife Stefanie and his son Leonidas, and many attendees.

Costas Stefanis played a key role in the design and establishment of The Cyprus Institute and was a member of the first Board of Trustees of the Cyprus Research and Educational Institute (2005-2013). He made a significant contribution to shaping the vision of the Institute and supported it since its inception.

During the event, there was unveiling of a marble honorary plaque for the newly-built Amphitheater of the Cyprus Institute that now bears his name.

“The dedication of the Institute's new Amphitheater to such an important scientist, man and citizen, is the least we could do to show our gratitude. It is a reminder that excellence in science is respected and gains universality and efficiency, when it is accompanied by participation in a vision of universal values that realizes them”, noted the President of The Cyprus Instite , dedicating the new amphitheater.

In his address, the Minister of Agriculture, Rural Development and the Environment, Costas Kadis, speaking on behalf of the President of the Republic, said that “undoubtedly, the achievements of The Cyprus Institute, which have been recognized internationally, honor our country and are indicative of Costas Stefanis' contributions.”

He noted that the participation of such a personality helped to create synergies with outstanding international scientific institutions, creating good prospects for cooperation, while his political presence was decisive and contributed to the networking and the promotion of the Institute in Greece.

He also said that during the period of economic crisis, when the Institute's prospects were questioned, Costas Stefanis pioneered the institute's defense and support as he recognized its important role in Cyprus and Greece.

The President also welcomed the decision of the Board of Trustees to honor such an important personality that contributed substantially to the design and foundation of the Institute, "for which I am sure he was proud of the way it was established and has since progressed."

"This beautiful space hosting this evening's event will now bear the name of Costas Stefanis to remind everyone of his legacy," he said.

In conclusion, the President of the Republic expressed certainty that CyI, "taking into account the collaborations it has developed with internationally distinguished scientists and political figures, will continue its positive course and actions, always on the basis of the values that characterized the life of Costas Stefanis: creativity, professionalism, modesty and solidarity with our fellow human beings, achieving even higher goals for our country.”

In his speech, former Prime Minister Konstantinos Simitis said that Costas Stefanis was highly intelligent, an academic in the full meaning of the term, liberal minded and restless, temperate, methodical and effective.

He said that in the 1980s, and for seven years, Stefanis was President of the World Psychiatric Society and from this position "he was able to break down the Iron Curtain that had divided the psychiatric community."

“As evidenced by famous psychiatrists of the time, the Western world had opposed Soviet practices of psychiatric "healing" to political opponents. Stefanis managed to build bridges of communication and reconciliation between the two worlds, demonstrating important arbitration and negotiation skills" he added.

Simitis also said that the event highlights Stefani's significant scientific activity by his participation in the founding in 2005 of The Cyprus Institute and its subsequent development. "I was lucky, because my involvement in setting up the Institute was an exciting experience," he used to say afterwards.

In his address, CyI President Professor Costas Papanicolas, outlined the history of Costas Stefanis’ involvement in the establishment and development of the Cyprus Institute and presented some of the hallmarks of his participation making personal references to his acquaintance with Costas Stefanis.

He said that Costas Stefanis became a founding member of the Board of Trustees, with Hubert Curien as the President, followed by Edouard Brezin. "His intense presence and active participation in the Institute's activities marked his eight-year mandate, and then as an Honorary Trustee. The footprint of Costas Stefanis at the Institute was decisive" he said.

He added that “in the years of the financial crisis, which also affected the Cyprus Institute, and the Institute was threatened, Costas Stefanis enthusiastically supported the Institute through his personal connections with Cypriot personalities, emphasizing how important he considered the project and how important it was to support it.”

He stressed that this development is largely due to the personalities who believed in its vision and that Costas Stefanis is undoubtedly among them.

"Today's ceremony, commemorated by Mr Simitis, Mr Vassiliou, important CyI leaders, President Anastasiades who wanted to be with us today, but unfortunately the extraordinary EU summit prevented him, but also the presence of all of us, is indicative of our appreciation and love towards Costas Stefanis" concluded Prof. Papanicolas.

Finally, Prof. Papanicolas presented Prof. Stefanis’ wife and son a memorial album with photographs of Costas Stefanis’ work at The Cyprus Institute. Taking the floor, Costas Stefanis’ son Leonidas thanked all the speakers and people who attended, and expressed the gratitude of the whole family for the honor to dedicate the auditorium in his father's name.