On Thursday,19th of May, The Cyprus Institute organized the 2022 Hubert Curien Memorial Lecture entitled “Economic & Financial Crises: A (Statistical) Physicist’s Viewpoint”. The speaker was econophysics pioneer and world-renowned Paris-based statistical physicist Jean Philippe Bouchaud, Professor at École Normale Supérieure and Founder and Chairman of Capital Fund Management (CFM). Prof. Edouard Brézin, Trustee Emeritus and Former President of the Board of Trustees of The Cyprus Institute, Emeritus Professor at École Normale Supérieure, and Former President of the French Academy of Sciences, introduced the speaker.

The public talk was held at The Cyprus Institute’s open-air Costas “Stefanis Amphitheatre” in Athalassa, and was organized for the 14th year within the context of the Hubert Curien Memorial Lecture Series. The event was attended by state and civic officials, ambassadors, members of the Board of Trustees of The Cyprus Institute, and distinguished personalities from the scientific and business world.

In his talk, Prof. Bouchaud noted that financial and economic history is strewn with bubbles and crashes, booms and busts, crises and upheavals of all sorts and understanding the origin of these events is arguably one of the most important problems in economic theory. Additionally, Prof. Bouchaud referred to the 1972 article titled “More Is Different” by Nobel - winning physicist P. W. Anderson, who wrote that "the behaviour of large assemblies of individuals cannot be understood by extrapolating the behaviour of isolated individuals. On the contrary, completely new effects, sometimes spectacular and difficult to anticipate, may appear and require new ideas and methods”.

Prof. Jean Philippe Bouchaud explained in his lecture that the purpose of statistical physics is precisely to try to understand these collective phenomena, which do not belong to any of the underlying elementary constituents. “Numerical simulation of particles in physics, engineering or of other agents such as epidemiology, social sciences, economics, allows one to account for interactions and heterogeneities that are hard to include in analytical theories. Each agent (particle) follows simple rules with interactions, however, the macro-level can reveal unexpected, complex dynamics emerging from interactions”, he noted.

Finally, the Professor noted that in particular, small changes at the individual level can lead to dramatic effects at the collective level. In this respect, Prof. Bouchaud elaborated on several simple examples, which demonstrated the need to go beyond the models of classical economics, based on the idea of a rational “representative agent”, for which only external (exogenous) events can lead to crises - whereas many socio-economic or financial phenomena seem to be endogenous in nature. “Classical models always revert towards the unique equilibrium and tend to overestimate the resilience of the system. However, in agent based models, the “scenario generators”, sometimes find difficult to imagine and anticipate, or get beyond the reach of classical models. Simulation and scenarios are the future of complexity economics. In radically uncertain situations we need a qualitative “scenario generation”. Emerging phenomena are well accounted for in physics and elsewhere, but they still only marginally present in economic models. It’s better to be roughly right rather than precisely wrong”, he concluded, quoting John Maynard Keynes.

Prof. Jean-Philippe Bouchaud is the Founder and Chairman of Capital Fund Management (CFM) and Professor at École Normale Supérieure, where he teaches a course entitled “From Statistical Mechanics to Social Sciences”. He graduated from École Normale Supérieure in 1985 and worked for the CNRS and the CEA. He spent a year at the Cavendish Laboratory, University of Cambridge in 1992. A pioneer in econophysics, he co-founded the company Science et Finance in 1994, which later merged with Capital Fund Management (CFM) in 2000. His work covers the physics of “complex” systems, the statistics of stock market fluctuations, microstructure and price formation and macroeconomic agent-based modelling. Prof. Bouchaud is recipient of the IBM Young Researcher Prize (1989), the CNRS Silver medal (1995), and was elected Risk Quant of the Year (2017) and Member of the French Academy of Sciences (2017). He held the Bettencourt Innovation Chair at Collège de France in 2021.

The Cyprus Institute founded the Hubert Curien Memorial Lectures Series, in honor of the late Prof. Hubert Curien (1924-2005), a Trustee of the Cyprus Research and Educational Foundation (CREF), and founding Chair of its International Council. Prof. Hubert Curien, a physicist, is regarded as one of the most influential scientists and science policy makers of the 20th Century. After an involvement in the French resistance at the end of World War II, Hubert Curien graduated from the École Normale Supérieure.

His scientific work was devoted to crystallography and he became an Assistant Professor at Paris University at the age of 27 and Professor five years later. He worked at CNRS as the Head of Physical Sciences Division and soon after as Director General. He served as Minister for Research (in several governments under the presidency of F. Mitterrand), but he never stopped teaching during all those years. He assumed a number of leading positions within European Science: President of the European Science Foundation, President of the European Space Agency, President of the Academia Europaea, President of CERN Council, as well as in France, where he had been President of Académié des Sciences de France and in numerous science boards. He was highly respected for his devotion to science, his openness and his generosity to people. His contribution in the planning and realization of The Cyprus Institute was pivotal and profound. 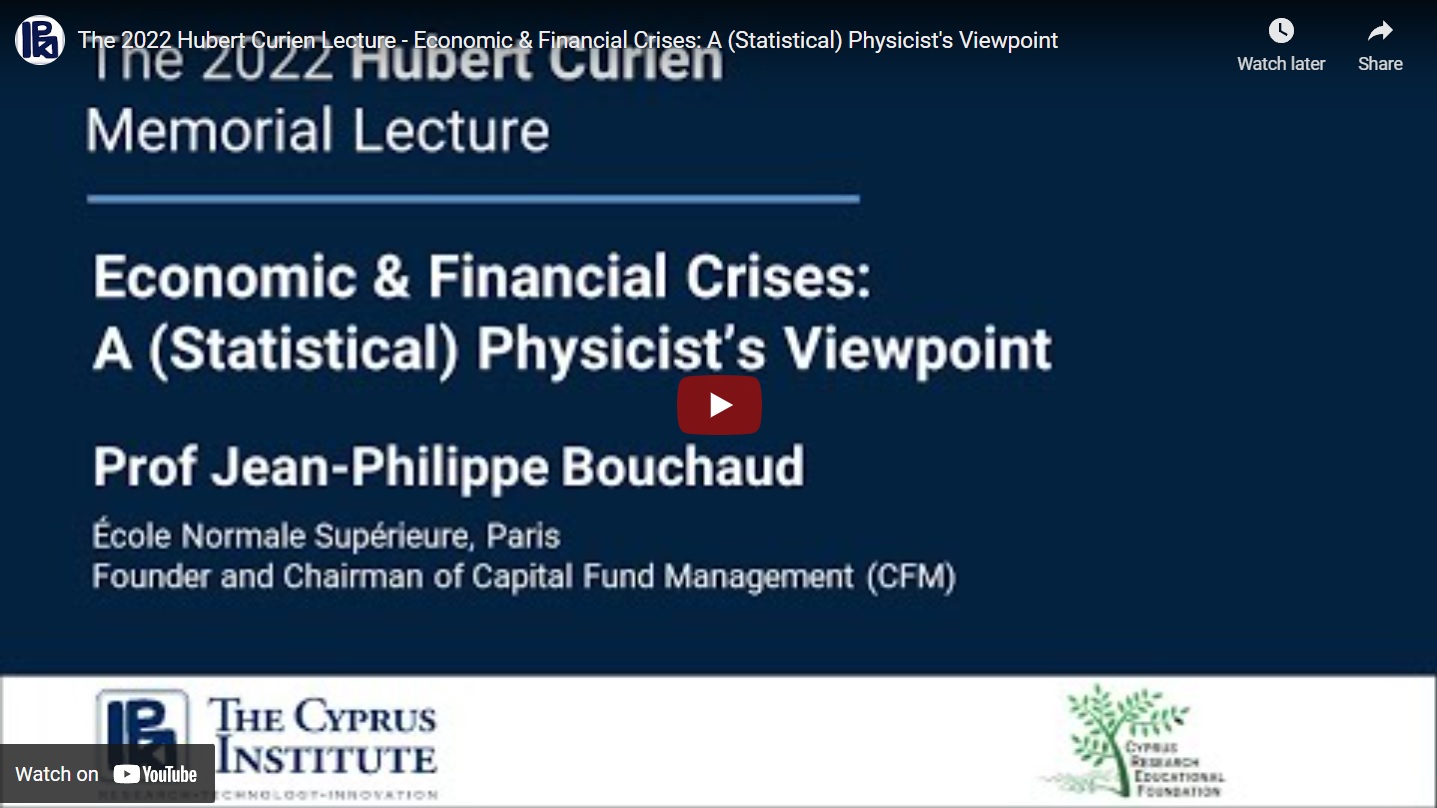