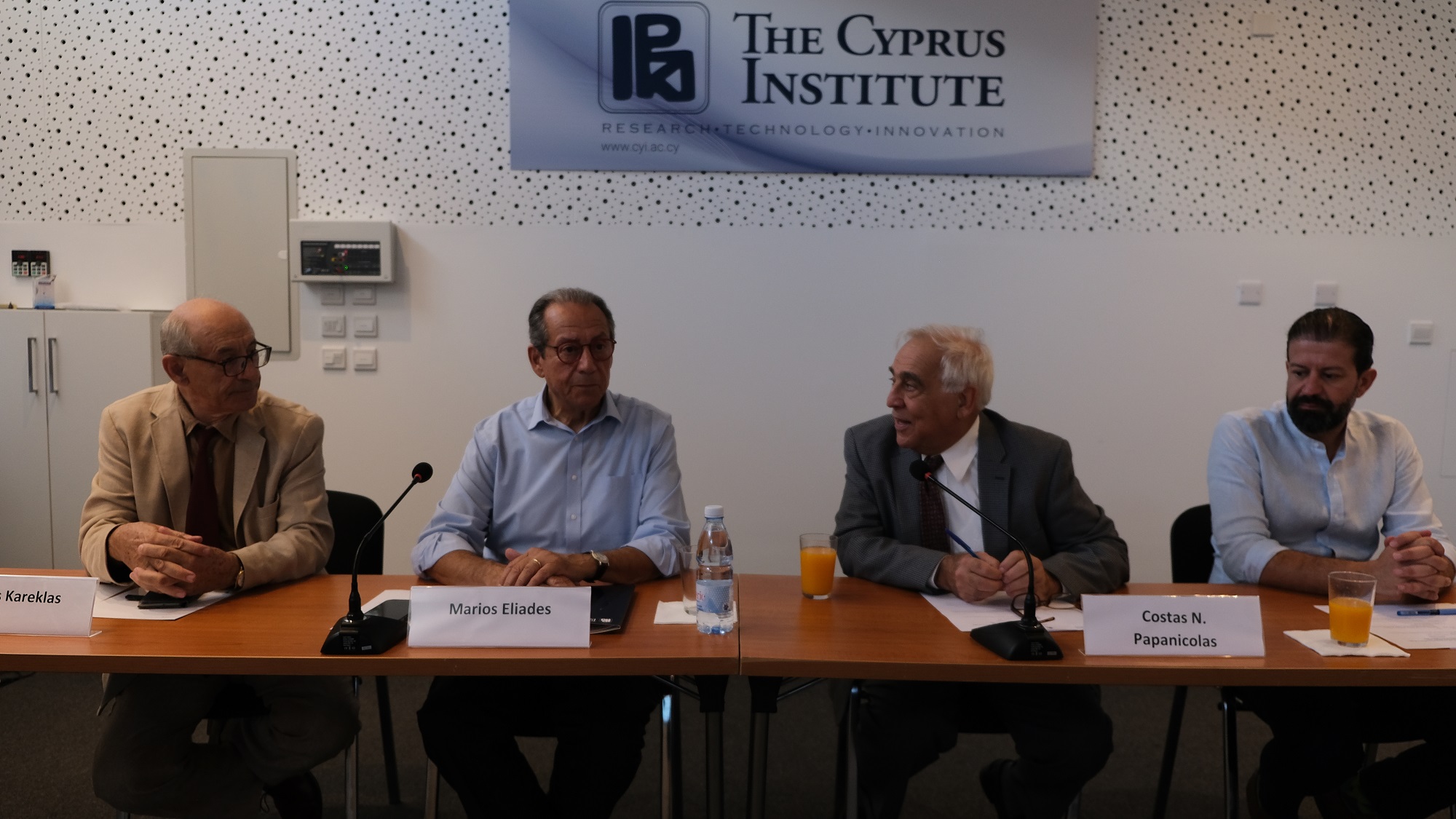 As part of its mission to support and promote The Cyprus Institute (CyI), the Friends of The Cyprus Institute Association has arranged for Presidential candidates in the ongoing presidential campaign to visit The Cyprus Institute, and have a dialogue with its staff on issues pertaining to education and research. A number of candidates will be visiting The Cyprus Institute in the forthcoming months, on dates arranged in consultation with their corresponding campaign staff.
On Wednesday, 14th of September 2022, Presidential Candidate and Member of Friends of The Cyprus Institute Association, Mr. Marios Eliades visited the CyI premises in Nicosia, where he was informed about its vision and mission, and was subsequently given a guided tour of its facilities. Mr Eliades was accompanied by Mr. Antonis Antoniou, Member of his campaign team.
Hosting the meeting was CyI President, Prof. Costas Papanicolas, in the presence of senior staff including CyI Vice President of Operations, Dr Michalis Yiangou, CyI Assistant Vice President of Strategy and Development, Dr Konstantinos Kleovoulou, CyI Assistant Vice President of Policy and Internal Communications, Mrs. Eleni Sophocleous, and Dr Vassilios Tsakalos, Director of Research and Technical Support. Also present on behalf of the Friends of The Cyprus Institute Association, its President, Dr Petros Kareklas, and its Secretary, Dr Lazaros Savvides.
Following a brief presentation on CyI’s activities and discussion between Mr. Eliades and CyI’s Administration that focused on issues of research, Mr. Eliades was given a guided tour of the CyI campus, facilities and Institute’s laboratories, including the Unmanned Systems Research Laboratory (USRL), the Linear Fresnel Facility (LIFE), and the Andreas Pittas Art Characterization Laboratories (APAC Labs).
During the visit Mr. Marios Eliades noted that he personally considers himself a strong supporter of CyI. “I believed from the first moment in the idea of ​​the establishment of CyI. The Institute has placed Cyprus on the map in the areas of research and innovation, while making a decisive contribution to the evolution and digital transformation of Cypriot society. CyI is a key contributor in the development of the country, so the state owes a lot to the Institution, and should contribute even more to its promotion” he added.
Prof. Papanicolas noted that this visit provided the opportunity for a fruitful exchange of views on key issues of major importance for Cyprus and the region, and thanked Mr. Eliades for his continuing support of CyI.
Dr Kareklas stated that this initiative and such visits are taking place within the framework of the Institute's actions, to bring the Institute's work, knowledge, research, innovation and its achievements closer to society. He also stated that CyI is a pioneer key contributor in Cyprus development in the area of research and thus it deserves the support of the state.
Finally, Mr. Eliades expressed his gratitude for the opportunity to visit, congratulated the Administration and the researchers of The Cyprus Institute for the impressive facilities and their research achievements, as well as praised the work and contribution of Dr Kareklas and Prof. Papanicolas for the great success of The Cyprus Institute.
View the embedded image gallery online at:
https://www.cyi.ac.cy/index.php/in-focus/visit-by-presidential-candidate-mr-marios-eliades-to-cyi.html#sigProGalleria4a1a0925fd